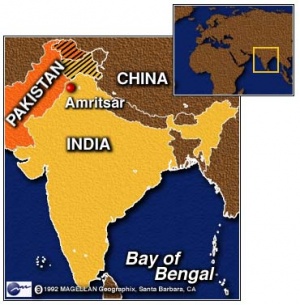 AMRITSAR (31°38'N, 74°53'E)(originally called Ramdaspur) literally "pool of nectar." This is now the name of a Sikh holy city located in the northern Indian state of Punjab, where the Harimandir Sahib complex is located. This is the current principal holy city of the Sikhs and is the headquarters of the district (Amritsar) in the Punjab. The foundation of the town was laid in 1577 by Guru Ram Das (1534-81) when he inauguarted the digging of the holy tank Amritsar (amrit = nectar, sar = pool) on a piece of land which, according to some sources, was purchased from the residents of the neighbouring village of Tung during the time of Guru Amar Das (1479-1574) and, according to other sources, was a gift from the Mughal Emperor Akbar (1542-1605) to Guru Amar Das's daughter, Bibi Bhani, married to (Guru) Ram Das. The name "Amritsar" was originally given to this holy pool created by the fourth Sikh Guru. Amritsar is one of five holy sarovars (sacred pools) in this city.

The habitation that grew around the sacred pool (sarovar) Amritsar was initially called Ramdaspur, or Chakk Ramdas, or simply Chakk Guru. Guru Ram Das encouraged people from various trades and professions to take up residence here. The town expanded further under his son and successor, Guru Arjan (1563-1606), who completed and lined the tank and constructed in its middle the holy shrine, Harimandar, now famous as the Golden Temple and also had two more tanks, Santokhsar and Ramsar, excavated near by. It was on the bank of Ramsar that he carried out the compilation of the Adi Granth (later Guru Granth Sahib). With the installation on 16 August 1604 of the Granth Sahib in the Harimandar, the shrine and the sarovar Amritsar surrounding it together became the central attraction of the town and a site of pilgrimage for Sikhs from far and near. In time, the town itself came to be called Amritsar.

Guru Hargobind (1595-1644) constructed near the pool and opposite the Harimandar, the Akal Takht, literally Throne Eternal, where he sat in state dispensing the secular business of the community. He also gave two more tanks, Kaulsar and Bibeksar, to the town. Guru Hargobind constructed a fortress, Lohgarh (literally, steel fort) on the western outskirts of the town. He soon came into conflict with the Mughal authority and was involved in a succession of skirmishes in and around the town. He decided to leave Amritsar early in 1635 and shift to Kiratpur, a town in the Sivalik foothills founded at his bidding by his son, Baba Gurditta, a few years earlier. None of the later Gurus resided at Amritsar which was controlled during the rest of the seventeenth century by Guru Hargobind's cousin, Miharban, and the latter's son, Harji, who headed the schismatic Mina sect. It was only after the creation of the Khalsa in 1699 that Guru Gobind Singh deputed Bhai Mani Singh with a few other Sikhs to go to Amritsar and resume control of the town and manage the holy shrines there on behalf of the Khalsa Panth.

This category has the following 7 subcategories, out of 7 total.