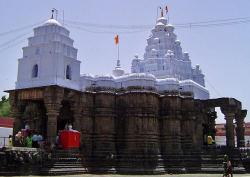 The present temple building is said to have been built by Yadavas of devagiri and dates to 13th century. The original temple is said to be from time of Mahabharata and is believed to have been constructed by Yudhishthira, eldest of Pandava, when they were expelled for 14 years from Hastinapur.It has been stated that this temple building was of seven-storyed before it was sacked by Aurangzeb during his reign.

Once Namdev went to Aundha Nagnath Temple (also sometimes written as "Avanda Nagnath Temple" ) situated in the state of Maharashtra in India. The Hindu priests of that temple believed in the caste system. After reaching the temple, Namdev sat and started worshipping God but the Hindu priests grabbed his arm and drove him out of the temple. The priests said that Namdev could not visit the temple because he was of a low class.

Namdev also said: "O Lord, please do not forget me because if You forget me then where should I go. There is nowhere else to go and no one else to believe in except You."

He further prayed: "Please do not forget me, do not forget me, please do not forget me, O Lord. The temple priests have doubts about this, and everyone is furious with me. Calling me low-caste and untouchable, they beat me and drove me out; what should I do now, O Beloved Father Lord? If You give me salvation after I am dead, no one will know that I attained salvation. These Priests, these religious scholars, call me low-born; when they say this, they tarnish Your honour as well. You are called kind and compassionate; the power of Your Arm is absolutely unrivalled" (Guru Granth Sahib, page 1292).

"As Naamdev uttered the Glorious Praises of the Lord, the temple turned around to face the Lord's humble devotee" (Guru Granth Sahib, page 1164).

"The Lord turned the temple around to face Namdev and its back to the priests" (Guru Granth Sahib, page 1292).

That temple is still rotated as can be seen at the site. In most Hindu temples, the water pool ("kuub") is normally located at the front of the mandir; at this site, it can be seen at the back of the temple. Further, most temples face east since that is the most auspicious direction in the Hindu faith as the Sun rises from the East and the Sun is considered the destroyer of darkness and the giver of life. The Aundha Nagnath temple faces West.

This is the symbol of the true love of God towards His true worshipper.

The town of Aundha Nagnath is in central India and by road to Nanded is about 68kms and 1 h 21 min by car/road.

According to the Hindu tradition, the Pandavas came here during their Vanvas (life in forests) and built a hermitage for themselves at this site. Their cows used to go to the same river bank to drink water. After drinking water, milk used to automatically flow into the river as if the cows were offering to the river. One day Bhima saw this miraculous event. He promptly told Dharmaraja about the same. Then Dharmaraja said, “Surely, some great God must be living in this river”. This is the belief of the Hindus.

It is here at Aundha Nagnath temple that the famous poet-saint Namdev met his guru Visoba Khechara. He was advised to visit this temple by Sant Dnyaneshwar.

There is one famous story told about Sant Namdev and Aundha Nagnath temple. Once when he was chanting Bhajans in front of the temple with others that the temple pujari told them their singing in front of the temple is disturbing their routine pooja and prayers and asked them to go away from temple. Then all Varkaris went back side of the temple and started singing bhajans there. But Lord Shiva and in order to be in the sight of the pining devotee and listen bhajans, revolved the temple. It is testimonial to that miracle why Nandi is located on back side of temple.

Guru Nanak, the founder of Sikhism is said to have visited Audha Nagnath temple when he travelled this area and also visited Narsi Bamani, the birthplace of Namdev. It may be mentioned here that Namdev is also revered in Sikhism, as Bhagat Namdeo