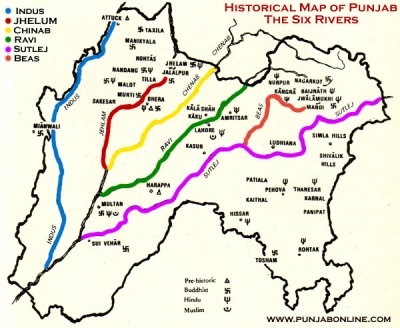 Punjab is the land of five rivers in north west India and north east Pakistan. Punj means "five" and aab means "waters", so "punjab" means "land of five rivers". These five rivers that run through Punjab, having their originating source as various small lakes in Himalayas. If one were to go across the Punjab starting from Delhi and to Afghanistan, the rivers are in this order.

The Beas merges into the Satluj at Harike near Ferozepur in Punjab just before crossing the border into west Punjab (Pakistan) where it eventually merges into the river Indus.

The area of Punjab that is between the Beas and Satluj is called the Doaba. The major cities in this part of punjab are Jalandhar, Hoshiarpur and Nawanshahr. Majha is between the Beas and Chenab and on both sides of the Ravi, this part is called the heart of Punjab and its cities include, Lahore, Amritsar, Gurdaspur, Sialkot, Kasur, Lyallpur(Faisalabad), Faridkot and Ferozepur. 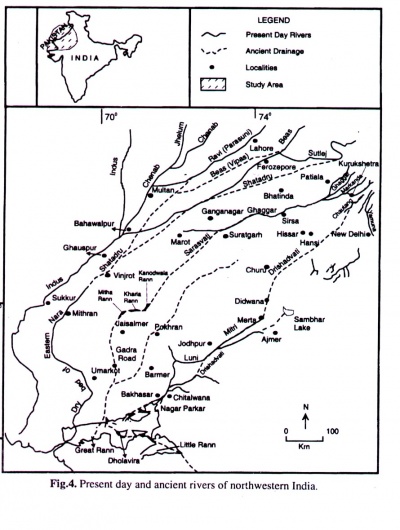 Punjabi civilization is one of the oldest on earth, with its distinguished language, culture, food, attire, script, folklore, people, etc. Punjabi langauge has its originating source in Sanskrit, Brahmi and Braj (not in Hindi or Urdu (once known as Hidustani) as many young Indian and Pakistanis believe), i.e. the family of Indo-European group of langauges which includes Persian, Latin and Greek. Punjab has always been a land of great saints and fighters.

In 326 B.C (2337 years ago) Alexander the Great invaded Punjab and conquered a great Punjabi king named Porus, whose kingdom was located between the Jhelum and Chenab rivers, at the Battle of the Hydaspes River (the Greek name for the river Jhelum). When King Poros was taken before Alexander the Greek asked Porus how he thought he should be dealt with. Porus answered that he should be shown the respect owed a king. He was restored back to his throne by Alexander. Alexander returned to Iran before crossing the river Beas, as his forces, now so far from their homelands, refused to go any further. In his train we have a reliable resource that tells us about Punjab 2450 years ago. Not much different from today (except for the technology).

Since 1947, when the historic Punjab was divided in two parts with a portion in Indian and another in Pakistani both halves still share the name Panjab. As the former capital of Lahore became part of Pakistan a new Capital city called Chandigarh was planned and built on the Indian side of the border. It now serves as the capital of both Punjab and Haryana. Considered one of the most beautiful planned cities in the world with its manmade lake, it has the highest standard of living and the highest per capita income in India.

The Indus River bounds the region in part of the west and the Yamuna River in part of the east. The five rivers that give Punjab its name, the Jhelum, the Chenab, the Ravi, the Sutlej, and the Beas, merge to form the Panjnad, which flows into the Indus.

Except in the north, where there are forested mountains yielding salt and coal, the Punjab is a level alluvial plain. Rainfall is scant and irregular, but extensive irrigation systems using the waters of the great rivers have made possible enormous agricultural productivity. Wheat is, by far, the leading crop. But millet, barley, cotton (one area was called the land of white gold), and sugarcane are grown as well and there are extensive fruit orchards. The Punjab has a large textile industry and much flour milling. Transportation and travel (by road, by rail, and on the rivers) is excellent. More than 60% of the population of Punjab is Sikh.