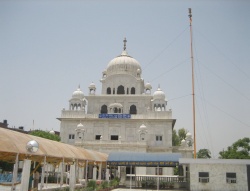 Gurdwara Moti Bagh Sahib (cordinates (28.585833°N 77.171396°E)) is situated on the Ring Road (Mahatma Gandhi Marg) in Delhi city between Dhaula Kuan and RK Puram (Shanti Path) south of the intersection with National Highway 8. Once Guru Gobind Singh ji camped at this site with his army. Earlier it was known as Mochi Bagh and later the name was changed to Moti Bagh. An old story relates that the Guru, an accomplished archer, shot two arrows from a colony of cobblers in Moti Bagh which hit the 'Divan' (throne or bed) of Prince Muazzam (later Bahadur Shah).

The Guru's first arrow announced his arrival in Delhi and the second arrow carried a chit saying, "It is not magic but skill of archery". Bahadur Shah was said to be sitting in the Red fort at the time. Seeing the arrow strike, Bahadur Shah took this as a miracle. The story continues that a second arrow landed in the Divan's left foot with a note (chit) pointing out that the Emperor was wrong in labelling the sudden appearance of an arrow in his cot as a miracle, as the note stated that this was not a miracle but a display of the Guru's skill in archery. The Emperor was said to be so impressed with this that he immediately acknowledged Guru Sahib's supremacy. 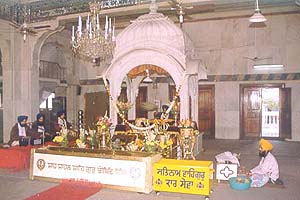 Gurdwara Moti Bagh is associated with the tenth Guru, Guru Sri Gobind Singh. He camped here during his first visit to Delhi. He had come to Delhi in response to the request made by Prince Muazzam who sought his help in the battle of succession for the throne of Delhi. This happened in 1707, when the struggle for succession started due to the sudden death of Emperor Aurangzeb in the Deccan. Bhai Nand Lal, a great scholar and poet of Persian, a devotee of Guru ji, requested the Guru's help in assisting Prince Muazzam, the eldest son of Aurangzeb, in his claim to the Mughal Throne.

The deohri from where Guru Gobind Singh shot the arrows has been preserved and the Guru Granth Sahib has been installed there as a mark of respect to the superb archery of the Guru. Even now from the top of the deohri (gate) one can see the skyline of Delhi and the Red Fort at a distance of about eight miles.

The Guru impresses the prince

Guru Gobind Singh already had a good impression about the prince who had earned the displeasure of his father by refusing to take part in the attack at Anandpur Sahib. The prince had been deputed by the Mughal Emperor to suppress the activities of the Guru in Punjab.

He had received alarming reports in Deccan from the Shivalik Hills Chiefs against the Guru. But the prince after making an impartial inquiry into the false reports sent by the hill chiefs had written to the Emperor that Guru Gobind Singh was a darvesh (Holy-man) and the real trouble makers were the Hill Rajas. His opposition to father's wishes had cost the prince some time in prison.

Aurangzeb did not believe what his son wrote and had sent four of his best generals to find out the truth. These generals also reported that the Guru had done nothing against anyone and he led a saintly life in his city state. They in fact also punished some trouble-makers who had been creating problems for the Guru.

Yet again in 1704, Anandpur Sahib was besieged by the combined troops of the Rajput hill chiefs and the Mughal contingent when Aurangzeb sought to dislodge the Guru from his stronghold on the persuasion of the hill rulers and the Mughal Governors. After putting up a tough fight the Guru chose to leave Anandpur Sahib under a sworn promise of safety from both the Hindus and their Mughal lords.

False promises made by Mughals 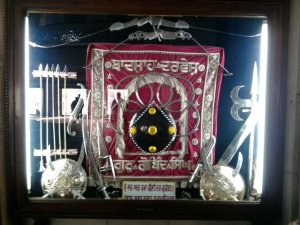 Ignoring their promises and 'Holy Oaths' of safe passage, the besiegers attacked the Guru who suffered the loss of his four sons, his mother and most of his Sikhs at Chamkaur, but the host of attackers also suffered very heavy losses at Chamkaur. But he still had no ill-will against the eldest son of the Mughal Emperor and agreed to help him in the battle of succession.

The Sikhs of Delhi have constructed a new Gurdwara building. But old building from where the tenth Guru shot two arrows to Red Fort is still intact.

Every year, on the anniversary of the first installation of the Adi Granth as Guru is celebrated with great enthusiasm by thousands of Hindus and Sikhs at the Moti Bagh Gurdwara. They remember with reverence the Guru Granth Sahib and Guru Gobind Singh, whose last injunction to his Sikhs was that, he who wishes to behold the Guru, let him search the holy Granth.

Guru Gobind Singh ji left for his heavenly abode on October 7, 1708. At the age of 42 Guru Gobind Singh was immortalised. Throughout his life he struggled against religious intolerance and oppression of the downtrodden.

His teachings are summarised in the following line':,

"The same God dwells in the temple and the mosque,

The Hindus worship and the Muslims pray

Human beings are all one though of diverse forms,

The Muslims and Hindus are all one,

Imbibe the influence of environ, they inhabit,

Similar eyes, ears, body they have,

They are made of earth, air and water alike,

Allah and Abekh are the names of same One,

Whom adore the holy Puranas and Quran,

All are of the same form,

And one in their making"

The straight line distance from Motibagh Gurdwara (new building site) to the Red fort is about 6.5 miles or 10.4 kms as the crow flies.