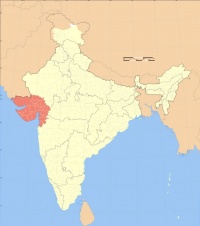 The location of Gujarat in India

Gujarat's Western and Southern coasts lie on the Arabian Sea. Its capital, Gandhinagar is a planned city that is located near Ahmedabad, which is the former state capital and the current commercial center of Gujarat. Surat, a major industrial city, located in Southern Gujarat is also known as the Diamond City. With 19.8% of the country's total industrial output, Gujarat is the most industrialized state in India.

The thousands of years old temple cities of Dwarka, and Somnath, are located on the seaside areas in Gujarat State. The Rajputs also held control over much of Gujarat including the famous Hindu Solanki Dynasty which ruled the whole of present day Gujarat, from CE 942 up to CE 1244. After 1244, Gujarat came under the rule of the Delhi Sultanate, a Muslim Dynasty, belonging to Delhi City.

From 1403 upto 1573, Gujarat came under the rule of an independent Muslim break away Sultanate and was named Muzaffarid Sultanate of Gujarat. Until in 1573, Emperor Akbar, conquered the Gujarati region, adding it to Hindustan. The Portuguese took Daman and Diu, from Gujarat. Petty local Muslim Chieftains carved their own rule in Gujarat, until 1947, when Gujarat was given to India.

During the Slave trade, Portuguese, and British, brought African Slaves, to the coastal areas of Gujarat, between 1700s-1800s. and sold them off to native Gujarati Muslim rulers, or Sultans. They are known as Siddis, they follow Islam, and are concentrated in Jungadh area of Gujarat State. Many have converted to Hinduism, about a 100 year ago. Some to Christian faith.

The state encompasses major sites of the ancient Indus Valley Civilization, such as Lothal and Dholavira. Lothal is believed to be one of the world's first ports. Gujarat's coastal cities, chiefly Bharuch, served as ports and trading centers in the Maurya and Gupta Empires. Mahatma Gandhi was a Gujarati.