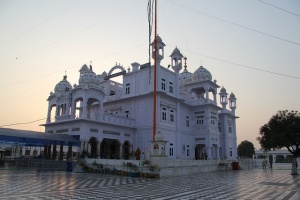 Also known as Gurudwara Bir Baba Buddha, this is situated in the revenue limits of the village of Thatta, 20 km south of Amritsar. The shrine honours and commemorates Baba Buddha (1506 - 1631), the venerable Sikh of the time of Guru Nanak who lived long enough to anoint five succeeding Gurus.

He spent many years looking after the "bir", literally a reserved forest used for cattle grazing, said to have been offered to Guru Arjan by Chaudhari Langah of Patti out of his private lands. According to Gurbilas Chhevin Patshahi, it was here on 21 Assu 1651 Bk/20 September 1594, that Mata Ganga the wife of Guru Arjan, received blessings for an illustrious son (the future Guru Har Gobind, Nanak VI) from Baba Buddha. 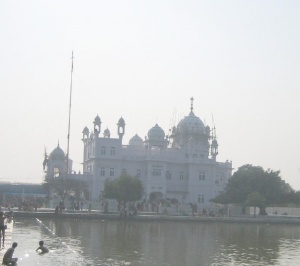 When Mata Ganga, the wife of the fifth Sikh Guru desired the blessings of a son from her husband, Guru Arjan Dev, suggested that she pay a visit to Baba Buddha ji to ask for the gift. Mata ji got delecious food prepared by her attendees and visited Baba Ji at this venue with great pomp. But Baba ji refused to accept the food. Later Mata ji herself prepared a simple and basic meal of "missi roti and pyaag" (basic Indian bread and onion) and visited Baba ji.

BABA BHUDA JI blessed Mata ji by telling her that her son would be a great warrior and he will crush the tyrants head as he simultaneously crushed the onion with a clinched fist. Consequently, Mata ji and Guru Arjan were blessed with just one son who later became the sixth Sikh Guru, Guru Hargobind.

This gurudwara is popularly known as simply Bir Sahib, is situated about 2 km northwest of Thatta. The present complex was raised by Baba Kharak Singh, a follower of Sant Gurmukh Singh Sevavale. The sanctum, where the Guru Granth Sahib is seated on a canopied seat of white marble, is a metre high square platform at the far end of a rectangular hall constructed in 1951.

The 70 metre square Sarovar is to the north of this hall. A spacious divan hall was added in 1975. Guru ka Langar with a large dining hall and a two storeyed residential block for pilgrims are in a separate compound. Besides, there is a Khalsa higher secondary school (established 1963) as well as a Khalsa College (established 1969), both named after Baba Buddha.

The Gurdwara is managed by a local committee under the auspices of the Shiromani Gurdwara Parbandhak Committee. Besides the daily prayers and the celebration of important anniversaries on the Sikh calendar, largelyattended divans take place on the first of each Bikrami month. The biggest function of the year is a religious fair held on 21st of Assu, corresponding with 6 October.