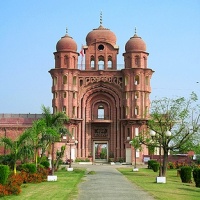 Gurdwara Rori Sahib (32.0475°N 74.2489°E) is located 2 kilometres south-east of present-day Eminabad and one and a half kilometre north-west of the centre of the village called Talab. Eminabad, an old town is about 55 kilometres north of Lahore and 15 kilometres south of Gujranwala and is a famous town of Gujranwala district in West Panjab, Pakistan. It is linked to Grand Trunk Road and Eminabad railway station by four-kilometres stretch of metalled road. This area has three important historical shrines of the Sikhs - Gurdwara Rori Sahib, Gurdwara Chakki Sahib and Gurdwara Khuhi Bhai Lalo. 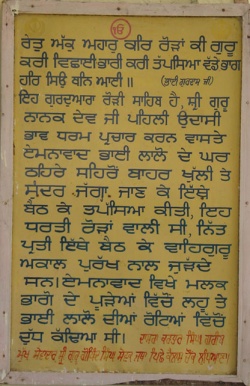 Gurdwara Rori Sahib is the sacred shrine which marks the site where, according to tradition, Guru Nanak after the destruction of the town had stayed with Bhai Lalo. Here the Guru had to sit and lie on a hard bed of pebbles (small stones) (ror-ree in Punjabi) as alluded to in Bhai Gurdas Varan 1.

An imposing Gurdwara has been built over the place. A large pond and other buildings make it more graceful. A large estate worth Rs.5000 per annum and 9 squares of agricultural land is endowed to the Gurdwara from the era of Maharaja Ranjit Singh. Vaisakhi and Kattak Puranmashi festivals used to be held in the past but only Vaisakhi festival is held now where people from Gujranwala and its adjoining areas participate with fanfare.

This was the premier gurdwara of the town. Its central building is a three-storey imposing structure of cut brick work, which is topped with three chhatri-like structures covered with a large central gumbaz (dome) with smaller chhatris (dome-shaped pavilions) on either side. A rectangular hall adjoins it on the left side of the entry. A large sarovar, surrounded with low walls on two of its sides is set askew to the right of the central entry tower. At the rear of the complex there is a room topped with a particularly exquisite ribbed white lotus dome with a circumambulatory verandah. This room covers the pebbled area on which Guru Nanak was arrested.

Before Partition, Eminabad was known for its week-long Baisakhi fair which included largely attended Congregational gatherings of the Sikhs in Gurudwara Rori Sahib as well as the usual fun and a cattle fair. The multi-storeyed building was set on fire by a mob of zealots soon after the partition of the Punjab on 15 August 1947.

The building of the Gurdwara was falling apart but the Government of Pakistan stemmed the rot by constructing its boundary wall at a cost of thousands of rupees.

Some of the images may be viewed larger by clicking on the image.