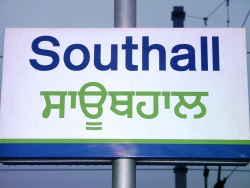 Train station sign in the Latin and Gurmukhi alphabets

Southall is a suburb in the London Borough of Ealing, West London. It is situated 10.7 miles (17.2 km) west of Charing Cross in central London. Neighbouring places include Yeading, Hayes, Hanwell, Heston, Hounslow, Greenford and Northolt.

Southall is located on the Grand Union Canal (formerly the Grand Junction Canal) which first linked London with the rest of the growing canal system. It was one of the last canals to carry significant commercial traffic (through the 1950s), and is still open to traffic and is used by pleasure craft.

The main street in Southall is called The Broadway. Southall contains the largest Asian shopping centre in the London area. Southall was the main location for the internationally acclaimed film "Bend It Like Beckham".

Southall is primarily a South Asian residential district. 1950 was when the first group of South Asians arrived in Southall, reputedly recruited to work in a local factory owned by a former British Indian Army officer. This South Asian population grew due to the closeness of expanding employment opportunities such as Heathrow Airport. The most significant cultural group to settle in Southall are Indian Punjabis.

One of the Sikh Gurdwaras in Southall won the Ealing Civic Society Architectural Award in 2003. The Gurdwara Sri Guru Singh Sabha, which opened in 2003, is the largest Sikh temple outside of India.

Southall is also the location of the 'Glassy Junction' a public house, which serves several Indian draught beers and was the first pub in the UK to accept payment in Indian rupees. Also the film "Dhan Dhana Dhan Goal" starring John Abraham and Bipasha Basu was filmed in Glassy junction and outside Iceland supermarket.