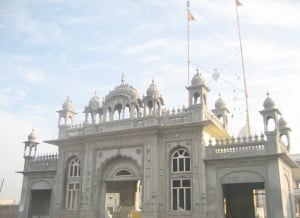 Gurdwara Sangrana Sahib: This is where Guru Har Gobind won his first battle

Gurdwara Sangrana Sahib is situated on the Taran Taaran Road in Amritsar District. This is where Guru Har Gobind ji won his first battle, the Battle of Amritsar in 1628 and gave a boon of 7 sons to Mata Sulakhni ji. After the death of Emperor Jahangir, Shah Jahan became the Emperor of Hindustan in 1628. Shahjahan appointed Kuleej Khan as the Governor of Punjab. Kuleej Khan kept Mukhlis Khan on as the Army's Commander. Once day some Sikhs while out hunting reached the boundary of the Sanctuary of Gumtala, a Sanctuary that was reserved for only the Royal Governor's use.

It so happened that day that some members the Royal Army were hunting in the preserve. The Mughal hunters were exercizing the Emperor's hawk which was flying in the sky. The Sikhs also flew one Hawk into the sky. The Hawk of the Sikhs, caring little of human boundaries, knocked the Royal Hawk to the ground and the Sikhs ended up capturing the Royal Hawk. The Royal Army, already upset that the Sikhs were hunting in their private reserve, asked, with some indignance - even using some 'bitter' words, that the Hawk be returned. On hearing them use such mocking words, the Sikhs refused to give the Hawk back.

Not just any Hawk

The hawk, it turned out, was a special hawk, a rare white one that had been given to Emperor Shah Jahan as a gift by non other than the Shah of Persia. The loss of such a valued gift would have to be explained. So the Royal hunting party returned to Lahore and gave, of course, an exaggerated report of the whole incident. Complaining of the Sikhs hunting on the Govenor's private reserve, they of course probably added that the Sikhs were far superior in numbers - to explain why they had not just taken the Emperor's hawk back and they probably even blamed the use of foul and derogatory language on the Sikhs. Bullies when challenged have been explaining their lack of courage away like this for centuries. They ended by complaining to the Govenor, 'today the Hawk of the Emperor tommorow they will be after the gaddi as well'.

The Govenor escalates the whole affair

What was he to do, some of his men, while hunting in his royal preserve had been bested and cowed by some Sikhs, men who in their spare moments, they were always belittling as upstarts, pretenters to any right to go about on horses with weapons and even go out 'hunting', especialy hunting with hawks! Hunting had always been the reserve of Rajas, Kings and Emperors and their royal minions, especially hunting with hawks, a sport reserved for royalty. And besides that there was the question the Emperor would surely ask--why had he let his men take his valued symbol of royal authority, his gift from his most exhalted Muslim brother the Shah of Persia, out to hunt. How could he ever explain such a loss, such stupidity!

Naturally he switched the subject and down played the cowardice of his men, the loss of the hawk--he went for the jugular of the Sikhs---Amritsar, the Harmandar Saheb and the Guru and his Akal Takhat. Everything his men had complained of, he exaggerated, flushing out the details with dire predictions of doom and humiliation. If the Sikhs got away with this insult to the Emperor's power, what next? He finished his exaggerated report to Shah Jahan, asked for reinforcements and permission to attack the Sikhs.

No doubt whipped into a lather by his advisors and his trusted Governor Shah Jahan gave them the permission they had sought. Kuleej Khan sent his Army Commander Mukhlis Khan along with 7000 soldiers to attack Amritsar. On 15th May 1629, the Army reached Amritsar. The Guru Saheb was not expecting such an attack. When the attacking Mughals, all dressed in black was almost upon them, he accepted the challenge happily and started immediate preparations for an attack on the mighals before they could launch theirs. While staying at Pipli Sahib, the Sikhs had an encounter with the Mughals. The Sikhs, seeing this battle for what it truely was, a fight for the very existance of their religion accepted it happily.

The battle delays a marriage

Bhai Bidhi Chand took charge and challenged the Royal Army. It just so happened that at that moment the marriage of Guru Har Gobind's daughter, Bibi Veero was about to start. The marriage party had to come to Amritsar, but before the blissful event had started the battle began with much fiercity. When Samshat Khan started to loose, Amber Khan came to his aide. On the Sikh side Bhai Bhana Ji's soldiers started firing. Samshat Khan attacked Bhai Bhana Ji in a fit of anger and in return Bhai JI responded with a solid swing of his weapon which beheaded Samshat Khan. Seeing Samshat Khan falling headless, the Royal Army circled BHAI BHANA JI & killed him with heavy firing. He was martyred in the battle of PIPLI SAHIB. Now Muhammed Ali came ahead. The Sikh forces were now being headed by BHAI SINGHA JI. BHAI NIHALA, BHAI TOTA, BHAI TIRLOKA, BHAI NANTA were fighting very bravely & were stopping the army to go towards HARMANDIR SAHIB. Muhammed Ali aimed at BHAI SINGHA JI & fired at him following which BHAI JI got injured & fell. He cautiously got up & hit Muhammed Ali with an arrow & he fell. When BHAI SINGHA JI got martyred, PAINDE KHAN took charge.

When GURU SAHIB, while taking care of the hilly, came to Lohgarh Fort, Mukhlis Khan attacked the Fort. On being asked by GURU SAHIB, one sikh carpenter from Khemkaran made a stone cannon out of a tree which had dried. Using this, there was a rain of stones from inside the Fort which made Mukhlis Khan's Army to loose ground. One battallion of the army attacked the town from Bibeksar side. Mukhlis Khan's army had a large quantity of arms but the Sikhs had strong detemination & GURU's trust with them. Fighting with great spirit Sikhs such as BHAI TOTA, BHAI TIRLOKA, BHAI NANTA & BHAI NIHALA were martyred. On the other hand Karim Beg, Jang Beg, Salman Khan were successful in bringing down one of the walls of the Fort. On seeing the wall coming down, GURU JI sent a message to the village of BIBI VEERO's intended husband that the marriage party should go directly to Jhambal instead of coming to Amritsar. As night fell, the battle stopped and the Singhs repaired the wall overnight. As the sun rose, the battle started again. The charge of the Sikh army was in the hands of Painde Khan & the Sikh army moved towards Tarn Taaran while fighting. GURU JI was moving ahead in order to motivate the army.

As Mukhlis Khan's headless body fell to the ground, his army, glad obviously, to respect the rules of a one-on-one fight happily withdrew from any further fighting. The Sikhs started running after them but GURU JI stopped them saying that one does not pursue the losers when a fight has been decided by one-to-one combat of the leaders. We will never know if the Mughals would have followed the rules of chivalry had their leader won the fight. The drums of victory were played. The Mughal had retreated. GURU JI had the bodies of all the martyrs collected together and cremated. Respecting the custom of the Muslims. The Guru ordered the bodies of the Mughals to be buried.

GURU JI had Gurdwara Sangrana Sahib built in rememberence of the 13 martyred Singhs.