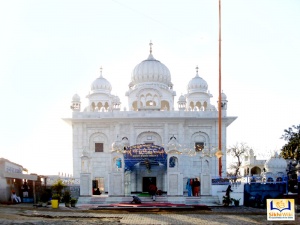 Gurudwara Chheharta Sahib, 7 km west of Amritsar (31° 38'N, 74° 52'E), is named after a well that Guru Arjan (1563-1606) had sunk. The well was so wide, and the water supply so abundant, that six Persian wheels installed around the interior of its circufrence could operate simultaneously. Hence its name Chheharta, lit. having six (chhe) Persian wheels (hart or harta).

The well has now been covered, but its water is still pumped to feed the main tank of the Gurdwara. Now developed as an industrial township, Chheharta falls within the revenue limits of Vadali Guru, a village one km to the south, where Guru Arjan stayed during 1594-97. 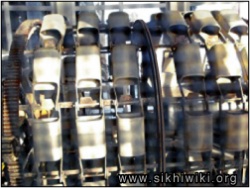 One of the Six Harts (Persian water wheel)

Set on a 6 acre walled compound, the complex includes a divan hall, with a square sanctum in the middle enclosed by a brass palisade, above which there is a square room with a lotus dome topped by a goldplated pinnacle and two Nishan Sahibs (Sikh flags), atop 25 metre tall flagposts, on either side, stand in front of the hall. 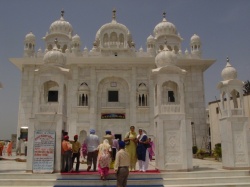 Congregations held on the fifth day of the light half of every lunar month attract large gatherings. The largest attended is the fair held on this day in the month of Magh (January-February) which marks the popular Basant Parichami festival.

The Gurdwara is managed by the Shiromani Gurdwara Parbandhak Committee through a local committee, which also controls other historical shrines of Vadali Guru.