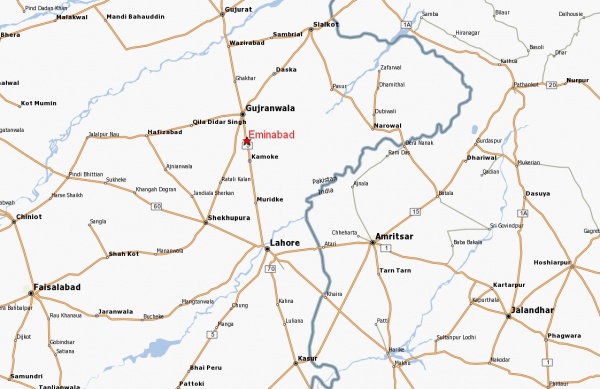 Map of Eminabad and surroundings (click on the map to enlarge)
map courtesy mapquest.com

During that time, it was called Sayyidpur (Saidpur). According to Bhai Bala Janam Sakhi, after leaving Sultanpur and before setting out on his long travels, Guru Nanak, accompanied by Bhai Mardana, first visited Eminabad where Bhai Lalo, a carpenter by profession, became his Sikh.

A hymn of Guru Nanak in the Guru Granth Sahib suggests that he was in Eminabad when the town was sacked by Babur in 1521. Janam Sakhis also mention that during the attack by the Mughal force the Guru was held in prison and given a stone-mill to ply. Eminabad came under Sikh rule when Sardar Charat Singh Sukkarchakia occupied it during the 1760's.

The town claimed historical shrines which were administered by the Shiromani Gurdwara Prabandhak Committee since 28 February 1922 until 1947.

Gurdwara Rori Sahib, half a kilometre northwest of the town, marks the site where, according to tradition, Guru Nanak after the destruction of the town had stayed with Bhai Lalo. Here the Guru had to sit and lie on a hard bed of small stones (rori in Punjabi) as alluded to in Bhai Gurdas Vaar 1. This was the premier gurdwara of the town. The multi-storey building was set on fire by a mob of zealots soon after the partition of the Punjab on 15 August 1947.

Gurdwara Chakki Sahib, inside the town, preserved as a relic a stone-mill which was believed to be the one which Guru Nanak was made to ply during his brief period of captivity.

Gurdwara Khuhi Bhai Lalo, also inside the town, marked the house and the well {khuhi, in Punjabi) belonging to Bhai Lalo. Here Guru Nanak had first met him.