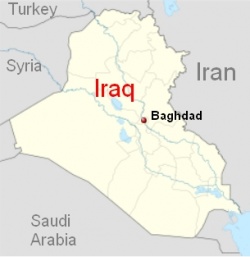 BAGHDAD (33.315°N 44.420°E), capital of Iraq, situated on the banks of Dajala (Tigris) River, has a historical shrine dedicated to Guru Nanak, who visited here on his way back from Mecca and Madina early in the sixteenth century. Here he held discourses with some local Sufi saints. A memorial platform was raised on the spot where the Guru and his companion, Mardana, the Muslim bard, had stopped. A few years later, a room was constructed there and a stone slab with an inscription in Ottoman Turkish was installed in it.

Translated into English it reads:

Look what was wished by the Glorious Lord in His majesty
That a new establishment be built for the Saint Baba Nanak.
The Seven gave help and there came this chronogram:
The blessed disciple performed a meritorious work. May He then recompense it!

The year which is now read as 917 Hijri was in earlier photographs of the inscription seen as 927. It seems the figure "2" has since been mutilated and now looks more like the figure "1".

In the literature relating to the life of Guru Nanak the tradition about his visit to Baghdad is strong and persistent. The earliest testimony is that of Bhai Gurdas who was born twelve years after Guru Nanak and lived through the times of five of the succeeding Gurus. He was, throughout his life, in close touch with them and with some of the disciples from the time of Guru Nanak himself.

In his Varan, I. 35, Bhai Gurdas wrote about Guru Nanak's visit to Baghdad and said: Translated into English the lines say, "The Baba, i.e. the Guru, journeyed on to Baghdad and made his seat outside the town." This writing dates to about 60 years after Guru Nanak. It is by one who had direct access to Sikhs of Guru Nanak's time and to the tradition coming down from him. The statement is clear and unambiguous and the words that the Guru sat outside the town are specially meaningful in this context.

The Janam Sakhis also refer to his visit to Baghdad. Mention has been made of Guru Nanak having met Shaikh Abdul Qadir Jilani and Bahlul Shah. These references are obviously anachronistic. Maybe, Guru Nanak met the disciples or descendants of these Sufi saints. But the very fact that Baghdad and the names of the Sufi saints are connected with the tradition, indicates that there was some firm basis for the story which became current soon after Guru Nanak's passing away.

The inscription was first discovered by Sikh soldiers going to Iraq, then Mesopotamia, during World War I and has since been a topic of much spirited speculation and scholarly discussion.