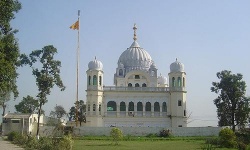 Gurdwara Kartarpur Sahib is located in town by the same name Kartarpur (Ravi) in Pakistan. The nearest town on the Indian side of the border is Dera Baba Nanak [1Km. from Border] in the district of Gurdaspur. The shrine is located about 3 kms from the Indo-Pakistan border.

The original abode established by Guru Nanak was washed away by floods of the river Ravi and the present Gurudwara was established by Maharaja Ranjit Singh. Recently, there has been lobbying to open the corridor for Sikhs from India to visit the shrine without any hindrance or visa. It lies only 3km from the border.

When Guru Nanak departed for his heavenly abode, Hindus and Muslims disagreed on how to perform the last rites. The Hindus as per their tradition wanted to carry out a cremation while the Muslims wanted to carry out a burial. A samadh (Hindu tradition) lies in the Gurdwara and a grave (according to Muslim traditions) lies on the premises as a reminder of this discord.

The gurdwara is located next to a small village named Kothay Pind (village) on the West bank of the Ravi River in Punjab, Pakistan. The Gurudwara at Kartarpur can be seen from another Gurudwara located across the border at the historical town of Dera Baba Nanak in India (It is not Daara, as so many people wrongly call it. Dehra is derived from the word Deh or body). Both sites are one of the holiest places in Sikhism located in the Majha region. Recently, there has been lobbying to open the corridor for Sikhs from India to visit the shrine without any hindrance or visa. It lies only 3 km from the border.

• The then Governor of the area, Duni Chand met Guru Nanak at Pakhoke and donated 100 acres of land to Guru Sahib. This land is on the right bank of river Ravi. On the Guru’s acceptance of the land he decided to settle there and a small building or hut was constructed. Kartarpur thus became the first Sikh centre. There is a reference in the historical books that Guru formally laid the foundation of Kartarpur on Magh 13, 1572 Bikrmi year [1515AD]. Apart from Duni Chand, Guru’s disciple Doda was also helpful.

• The Guru donned the clothes typical of a Punjabi farmer and began to cultivate the land around his new settlement. Soon his family; father, mother, wife and sons arrived at Kartarpur. Here the Guru lived the life of a householder for 18 years. Sikh history is replete with pleasant stories connected with Guru’s pious deeds at Kartarpur where he started the tradition called Guru ka Langer (a communal kitchen). Soon with his Sikhs moving to join the community a sarai (rooms for pilgrims, ect.) were built along with a meeting room where the sangat (congregation) gathered daily to listen to kirtan the Gurbani music and the Guru’s discourses. The Guru ka Langar was the place where the Guru's belief in the equality of every man and woman was first manifested in India, which had long been a segregated society based on the idea of varna, more commonly known outside of India as caste. People dined together irrespective of their former caste, creed or even their wealth. The food was grown, prepared and served by the sangat with members of Sangat taking turns as volunteers.

• It was in this city that Guru Nanak appointed Lehna his spiritual successor after others had failed some of the Guru's 'tests'. Some seeking the Guruship were not even aware that the seemingly odd things or tasks that the Guru had asked of them was his way of testing their humility and selfless dedication to their fellow Sikhs. His own sons had thought that certain duties were below the sons of the group's master. Guru Nanak gave Lena the name Angad as he named him his succesor on July 14, 1539. Lehna, who had never felt any work or task 'beneath him', was called Angad by Guru Nanak so that his followers would understand that he considered Lena to be a part of his own body. Ang means a part or piece of something with Angad meaning lit. born of or a piece of (Guru Nanak's body). Guru Nanak also handed over a pothi (booklet) of hymns to Angad.

• On Asu sudi 10, 1596 Bikrmi [Monday Sept. 22, 1539 AD] Guru Nanak breathed his last among at Kartarpur. Since his followers had been raised as Hindus or Muslims (each of which had different methods of dealing with one's earthly remains), an arguement arose over whether the Guru's body should be cremated or buried. Ultimately it was decided that overnight, flowers would be placed by each group on his body. Whoever's flowers were found withered the next morning would loose the claim. It is related that the next morning when the cloth sheet was removed the Guru's body was missing and both sets of flowers were found as fresh as when they were placed. The two communities then decided to divide the cloth sheet one burying it and the other consigning it to a fire. Therefore both a grave and a smadh exist at Kartarpur.

• Guru Nanak undertook four major Udasis (tours) trekking through many countries. Many sources tell us that except for his first journey they were all begun at Kartarpur. Kartarpur was the first headquarters of the Sikhs and their Gurus.

• Another story relates that Karori Mal the Governor of Kalanaur cultivated jealousy against the Guru as many Hindu Jogis and Muslims were converting to Sikhism. He set out to arrest the Guru but when he was mounting his horse he fell on the ground, his turban rolling down to the feet of people around. On his second attempt; tradition has it that he became blind and ultimately fell at the feet of the Guru and apologised for his past ill will. The Guru blessed him and he became a devoted Sikh of the Guru and donated the 100 acres of land (about 14 Km from Kalanaur) on the bank of river Ravi where Guru founded Kartarpur .

• Some historians have named Karori Mal as Duni Chand who was grand son of Jawahar Mal. There is a street in Lahore named Jawahar Mal. Bakshi Bhagat Ram a minister in Maharaja Ranjit Singh's court was a decendant of Duni Chand / Karori Mal.

• There are instances in the old history books [Janam Sakhis] relating how the Guru started the institution of Langar the free kitchen for all.

The famous Gurdwara, Darbar Sahib, Kartarpur (Ravi) is situated in this town.