Dasam Granth and its history

The History of Dasam (tenth) Guru's compositions (bani) begins with the time when these compositions were verbally spoken, composed and compiled by Guru Gobind Singh. These compositions in the form of booklets and Granths were created over various periods of the Guru's life. Later (after 1708), they were combined in the form of the present-day granth or single volume by Bhai Mani Singh Khalsa, with help of other Khalsa brothers. This was done on the direct instruction of Mata Sundri and this volume is presently recognized as Sri Dasam Granth Sahib. [1][2][3][4][5][6][7]

From historical books, Rehitnamas, old manuscripts and oral traditions of various Sampardas (sections of Sikhs), it can be observed that the Sikhs had access to these compositions which they studied, discussed and understood these compositions during Guru Gobind Singh's lifetime and after his demise in 1708.

Guru Gobind Singh left his holy abode of Nanded, India in 1708. In the late 17th Century (particularly after 1670 onwards) was the time when the Sikhs had to hide in jungles due to the constant attempts by the Mughal empire to eradicate them though various acts of persecution. There were very few attempts of writing Sikh history in this period in the 17th Century. Many of the compositions of Guru Gobind Singh were spread across India by Sikhs and a few more were shared by Mata Sundri at Delhi. Sikhs had access to various pothis (booklets) of Guru Gobind Singh's writings. These were available from contemporary historians and writers who wrote about Guru Gobind Singh's life.

The following are conclusive points reached about the Dasam Bani while studying Sri Gur Shobha:

Following is a detailed explanation, which shows that the Bachitar Natak Granth was present up until 1711:

This was one of the first book to illuminate the writings in the Sri Dasam Granth. This book is written not only in the style and language of the Sri Dasam Granth but some verses are similar to the verses found in Sri Bachitra Natak, most notably the battles of Guru Gobind Singh. It is clear that the court poets wanted to emulate the writings of Guru Gobind Singh Ji as these were read in the Guru’s darbars and gatherings.

Image Depicting Guru Gobind Singh with his Poets at Paunta

Following facts about Guru Gobind Singh's compositions are present in this text:

This Rehitnama is also available in the market in a book "Rehitnamey: Piara Singh Padam", published by Singh Brothers. 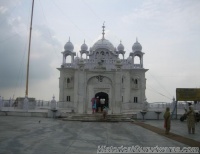 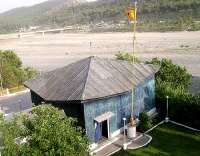 Key Facts regarding history of Dasam Guru's Compositions are:

It is believed that he must collected this all material for more then 5-10 years which give us lighten that Compositions of Guru Gobind Singh was available before 1740. As verses mentioned in Sri Gur Sobha(1711) and Parchian Sevadas(1741), which gives us strong belief about it's Creation.

This is first attempt to write history post Guru Gobind Singh demise at large scale thats why it is target of Anti Dasam People to degrade this text as it mentions Dasam Bani was collected and made in form of Granth. It is called ""Chotha Granth"". This source mention all events of creating and purpose of creating Dasam Granth.

The most referred book by any historian is Guru Ki Sakhian, which is too followed during Making of Nanakshahi Calendar.The books gave us so many versions about Compositions of Guru Gobind Singh. After Studying we get following facts. 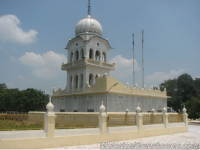 Giani Sukkha Singh was Priest at Patna. He wrote about Gurbilas Patshahi 10.

Kavi Kankan was believe to lived during time of three Gurus and was one of Poet of Guru Gobind Singh's Darbar. In his book he mentioned history of 10 Gurus. He ended his narration of Guru's history upto Khalsa Panth creation. Scholars fixed Das Guru Katha, is to be Creation of 1699, but some affix it to be of late 18th Century. About Bani of Dasam Patshah, following facts comes out from his COmposition:

In 1812, JB Malcolm collected account of Sikhs and mentioned about Dasam Granth at various pages. During his time the collection of GUru Gobind SIngh's composition is called Dasama Padshah da Granth. He added many things into sikhism with this granth. Acc. to him he established this war like granth to fight against tyranny. He also added translations of Some shastras for people to study.

Following are some of extracts from his book:

Proofs in Sketch of Sikhs about Guru Gobind Singh's Compositions

Giani Gian Singh (1822-1921), poet and historian, was born of a Dullat Jatt family on 5 Baisakh 1879 sk/15 April 1822, at Laungoval, a village in present-day Sangrur district of the Punjab. The Panth Prakash and Twarikh Guru Khalsa are the most important but not the only works of Giani Gian Singh. About Dasam Banis he was believer of Whole Dasam Granth Sahib. Panth Parkash is started with Manglachara of Gurus and Chandi. Following are facts of Dasam Bani present in his literature: 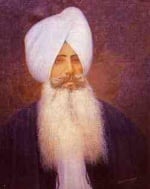 The Great Sikh Scholar and a known part of Singh Sabha Movement was strong believer of Dasam Guru's Banis. He explained and quotes various things from Dasam guru's Bani.

With this one could easily think that Singh Sabha Movement beginners were all believers of Dasam granth. For Ditt Singh's writings one may contact Pritam Singh, a resident of Mohali who collected all writings(70+) of Ditt Singh.

* The Stub will be updated slowly

Image depicting view of Prof. Sahib Singh on Anti Dasam Agents, made from his article

Professor Sahib Singh was great Sikh scholar who did interpretation of Guru Granth Sahib and mentioned in his writings about Dasam Granth as writings of Guru Gobind Singh. He quoted various aspects of Dasam granth in his teekas and writings.

Sant Jarnail Singh Bhindrawale, was a head of Damdami Taksaal who was MartyredIn 1984 at the Akal Takhat. He was great supporter of Dasam Granth. He gave various lectures on Dasam Granth and did katha of Bachitar Natak, Jaap Sahib and Other Banis [8].

From starting of 1900, Teja Singh Bhasaur where started speaking against Bhagat Bani/Bhatt Bani/Gursikh bani present in guru granth sahib, he also spoke against Dasam Guru's Bani. His movement was continued and arose again in end of 20th century and beggining of 21st century on wide range, though all the logics given are rejected by various scholars, the followers of this movement continued spreading false knowledge due to lack of Historical Knowledge and less deep study of Guru Granth Sahib. Regarding history :

Some question too asked which was answered well by Sikh Scholars and Gurmukhs:

Acc. to Dr. Jasbir Singh Mann, British introduced Dasam Granth tostrip the Sikhs of the spirit of independence and warfare which is a baseless claim that without any hard historical evidence. If the British aimed at stripping the Sikhs of their military might theywould have rather wanted the Sikhs not to read and revere Sri Dasam Granth which clearly contains the Bir Ras banee. Sri Dasam Granth also has details of the wars which Guru GobindSingh Sahib fought, and elevated the weapons to the same level as the embodiment of AkalPurakh. Hence by giving a detailed description of weapons and their usage and warning theKhalsa of the moral challenges it might face, Sri Dasam Granth prepares the Khalsa forwarfare, both physically and mentally.[10]

In his paper:Descriptions of the Dasam Granth From the Sketch of the Sikhs in View of Sikh History, Gurinder Singh Mann shows that Malcolm was an eye witness to the prakash of Sri Dasam Granth at the Akal Takht. He also states during the Ranjit Singh period the Sri Dasam Granth continued to be seen as a Sikh scripture same as that as the 18th century. He shows categorically that the British did not create the Sri Dasam Granth.

All Sources Before British Mention about Guru Gobind Singh's Compositions, which are mentioned above.

Acc to Anti Dasam People, All banis were written by Nirmalas after 1790, which is false according to above evidences. All Banis are Recorded in previous Histories from 1711 ownwards.

First Anti Dasam Compaign Said that, Nirmala priest Atma Ram of Calcutta worked with Mahants at Patna to create, compile and promote this Gurmukhi Granth titled “Dasmi Patshahi Ka Granth” in Devnagri to which Harpal Singh Pannu Replied In the numerous texts of the 19th century there is no mention of any Atma Ram working withany Mahant at Patna. One important 19th century text is Sri Gur Panth Prakash, the main Sikhtext of this period, which was written by Rattan Singh Bhangu a descendent of Bhai MehtabSingh Bhangu (who beheaded Massa Ranghar). There is no mention of any Atma Ram in thisimportant source of Sikh history. The Granthi of Patna Sahib, Baba Sumer Singh makes nomention of any Nirmala priest in his book.After Sri Dasam Granth was written it was then also transcribed in different languagesincluding Persian, Urdu and Devnagri. There is one copy of Sri Dasam Granth kept in theBritish Library that was written in Devnagri in the 19th century, over 100 years after thecreation of Sri Dasam Granth by Guru Gobind Singh Ji. There is however a mention of anAtma Ram in Malcolm’s ‘Sketch of the Sikhs’, who helped in deciphering the meaning of SriGuru Granth Sahib and other works for Malcolm (see p.9). And it appears that the same personhelped Malcolm understand the Indian judicial system (see p.128). There is no mention of anyGranth created by Atma Ram in this book and there is no mention of any Atma Ram workingwith Mahants from Patna.

All the above mentioned Sikh Scholars or chronicler (Historians), who had written about Guru Gobind Singh's life Birth to death (1666-1708) do mentioned about his compositions, and picked various verses/lines from Guru sahibs compositions in their own narration but haven't mentioned about the word "Dasam Granth" in any form. It is true, because the word "Dasam Granth" was coined later as Granth contains only the bani of Dasam Guru sahib, the khalsa first name it as "Dasvein Patshah ka Granth" later on the understood part "Patshah ka" eliminated because of short naming habit of human and the name "Dasam Granth" has been coined. The collection of Dasam Guru's Bani was done later by Khalsa Bhai Mani Singh under supervision of Mata Sundri from the devotee sikhs who took all these writings earlier from Guru sahib. More than 35 writers or copier were appointed by Guru sahib along with more than 50 Poets (Scholars) at Anandpur sahib. The main work of these writers/copiers were to copy writings of Guru Sahib and circulate among the sikhs for spreading message. All chronicler (historians) who mentioned events after Demise of Guru Gobind Singh also mentioned about Dasam Granth naming Chotha Granth, Bachitar Natak Granth or Dasvein Patshah ka Granth etc. How could chronicler (historian),who was just including lifetime of Guru Gobind Singh in his composition could mention the event which had't happened, during his lifetime and How a writer can go beyond the scope of his work? Yes, all mentioned the direct/internal references of Dasam Bani as discussed above, that was within the scope of chroniclers. [11]