Anti Dasam Bani Movement (Pa: ਦਸਮ ਵਿਰੋਧੀ ਆਂਦੋਲਨ), an active and rigid movement by few people against all Banis of Dasam Granth. It is believed this movement was started by Ram Rayias but later much revived by Teja Singh Bhasod in early 20th Century. It's aim is to abuse and remove the scripture and all banis out from Sikh Institution. As per records, Indian government(Congress and BJP) also planned to contaminate meanings of Dasam Granth.

Protesters refused to use these Banis in daily liturgy and even prepared their new Khande Batey Di Pahul, which included two Banis of Guru Granth Sahib only.

As per records, Ram Rayias were first who had hatered for Guru Gobind Singh, his compositions.

In Paayal Pur Ghudarni village, when Ragi Bulaki Singh read rehraas in sangat and read Chopai bani of tenth guru then Ram Raiyas abused him and Guru Gobind Singh and beat him too. Moreover they break musical instrument(saranda) he had with him. When Khalsa and Banda Singh Bahadur know this they went to Paayal Pur Ghudarni Village. Khalsa and Banda Singh Bahadur punished Ram Raiyas for their act. [1]

Reviving of this movement

BJP and RSS Against Dasam Granth 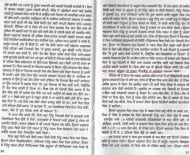 A Book Saka Neela Tara, attributed to General Kuldeep Singh Brar, quoted an event related to Conspiration against Dasam Granth by BJP, RSS and Indra Gandhi in 70's.[2] In text, he writes The Hindu thought is mixed with thought of Sikh Gurus and preached around those areas where Sikhs are of less count. RSS intrude many thoughts like Gurus were HIndu, follow Hindu customs, and worship Hindu dieties. They preached that 9 Gurus were hindus and 10th Guru Saved Hindus and give Hindus the Uniform too which is named as Khalsa. They also said that Sikh Granths should be study in Hindu Temples, which was done at Manikara first. BJP suggest that they should intrude hindu thought in Sikhism. Indra said that if intrusion can be done in Sikhism then terrorists like Bhindrawala will rose in Sikhism. RSS Member Sushil Kumar said that intrusion can be done on speed like Bohad Tree grows. RSS Gotam dev said that a Granth is their in Sikhism whose meanings can be contaminated with Hindu thoughts, which could make all stories rleated to Gurus true which were wrongly preached by BJP. According to them this dasam granth interpretations could be contaminated with hindu thought easily and which proves that Sikhs are Hindu with Hairs. 14 Members of RSS who were great scholars in Sanskrit, Persian and Hindi were used to find people to do this job but Indra Gandhi denied to defying someone's God

In Recent News, Colnel Brar said that he have not written book Saka Neela Tara

In late 20th and 21st century, this movement has spread around through seminars Seminars, books, pamphlets, newspapers, radios and world wide web. Slowly few members of this movement attacked on many histories and few banis of Guru Granth Sahib too.

Presently, All Sikh Institutions are publishing various articles in their magazines to suppress this Movement but no official discussions(High Authority of Sikhs) held till, yet, which led to continuation of this movement at small level.

Mostly protesters of this movement are excommunicated from Mainstream Sikhs and few youths which are emotionally motivated. Presently, Notable Protesters are Professer Darshan Singh(Ex-Jathedar) and Harjinder Singh Dilgeer(Sikh Historian).