Hikayat or Hikayataan (not a separate title in the Dasam Granth) is a famous name for the eleven tales composed in Persian verse, written in Gurmukhi by Guru Gobind Singh, as part of the Zafarnamah.

The title `Hikayat` does not occur in the actual text, but most of the tales have a verse, coming after two or three lines, which contains the phrase Hikaayat shumdem. Hikayataan, being the plural of Hikayat (story, tale), is adopted as the title for these tales.

Since Persian was the language of the Mughal Court, Guru Gobind Singh wrote the Zafarnamah in Aurangzeb's language, adding the Hikayats in same language. Guru Gobind Singh was well versed in Persian; the tales are in keeping with the literary taste and style of medieval India, ranging from the romantic and chivalrous to the fantastic and the macabre.

Tradition holds that Guru Gobind Singh composed and added the Hikayats in an effort to have Aurangzeb realize the folly of breaking his oath sworn on the Quran, hoping as well to improve the Mughal ruler's decision making ability. To rely on facts and check on the activities of his personnel. Gyani Narain Singh, one of interpreters of Dasam Granth also had the same view.

Many of these tales are the Persian translations of the narratives in Charitropakhyan which serves as an additional proof of single Authorship of both compositions [5]. Six of these eleven tales are Hindi tales retold in Persian: 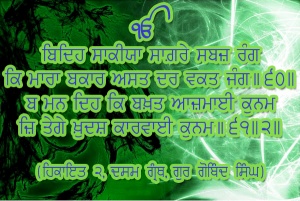 In the Dasam Granth, the Zafarnama is numbered one and the last story twelve, making them all parts of the Zafarnama and keeping the Persian section as a unit.

Hikayat 2 - Tale of King Daleep and his four Sons

Hikayat number two is about the Raja’s four sons who were tested to determine their fitness to rule. The three elder sons were given thousands of elephants, horses and camels. These they lost or squandered away. The youngest son was given a kernel and a half of gram which he planted, and from the harvest he was able to buy thousands of elephants, horses and camels, and to build cities of Delhi and Mungipatam besides. The moral seems to be the wisdom of relying on the power of God to produce wealth. Number three, is logically enough, a description of the perfect ruler, who fears God and no one else.

Hikayat 3 - Tale of King of China

Hikayat four is Charitar 52 given in Persian, the tale of the redoubtable Bachhitramati who would not take “No” for an answer to her proposal of marriage, but thoroughly defeated the obdurate Raja Subhat Singh in battle, and then married him. The appropriateness here in not obvious, but it is a good story.

Hikayat five is Charitar 267 in Persian guise. The beauty of the young wife of a Qazi was such that her reflection turned water into wine. She became enamoured of Raja Sabal Singh and offered to share her throne with him; but he, to put her off, says she must kill the Qazi first. She goes off and kills the Qazi in his sleep and brings the bloody head to the Raja; but then Sabal fears a similar fate at her hands and rejects her offer. She leaves the head lying there and returns to raise the alarm. People follow the bloody trail to where Sabal is sitting. The Emperor Jahangir turns him over to the murdered man’s widw. She winks at him, then pretends to start on a pilgrimage to Mecca, but turns back after dark to go and live with Raja Sabal Singh.

Hikayat six tells how the daughter of a Qazi rescues Raja Chakarwati from his enemies.

Hikayat 7 - Tale of King Darab and Queen of Rome

Hikayat seven is the account of Raja Darab who was put in a trunk and set adrift on the river by his mother, the Rani of Rome. He was rescued and brought up by a dhobi. Later, his mother recognizes his identity by the ruby ring she had put in the trunk with him.

Hikayat 8 - Tale of Princess of bilistaan

Hikayat eight is the counterpart of Charitar 118. It describes how a beautiful mother kills her two grown sons because her lover feared them. She then becomes a ‘’fakirni’’ (a female Muslim ascetic) but the God Shiva appears to her and grants her the bonnes of renewed youth and a meeting with her lover.

Hikayat 9 - Tale of King of France and his wife

Hikayat nine is supposed to come from France. It is Charitar 290 in Persian garb. A rani dresses her lover as a woman and keeps him (her) with her night and day – especially since the raja also has become interested in this youthful sitar player.

In Hikayat ten, Roshan Dimagh, the daughter of a Wazir, leads an army in battle with the Raja of Mayindra, captures him, and takes over his kingdom.

Hikayat eleven is one of the best known. It is Charitar 246: The daughter of a money lender steals the emperor’s famous horses from the imperial palace in Delhi.

Hikayat 12 - Tale of Pathan Raheem Khan and his wife

In Hikayat twelve the series of stories reaches a climax of horror in the story of a Pathan woman who, out of fear for her husband, kills her lover, cooks him and serves him up as a special feast to her hungry husband and friends, thus winning his approval by her wifely devotion. He then goes and kills the informer.