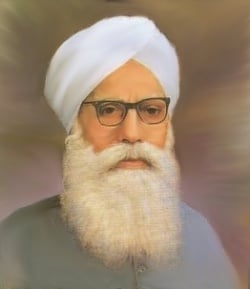 Professor Sahib Singh (16 February, 1892 - 29 October 1977) was a renowned Sikh academician who made a tremendous contribution to Sikh literature. He was an exceptional grammarian, author, scholar and theologian born in the village of Phattevali in Sialkot district of undivided Punjab.

Professor Sahib Singh was a devout of Dasam Guru's Bani (tenth Guru's compositions). He had written Teeka (explanation) of many banis of the Dasam Granth. He had a nice grip on most of Banis and interpreted it in the limits of Gurmat (Guru's ways). He even produced various papers to prove that Guru Gobind Singh was not worshipper of Lady/Idol Chandi. He quoted Dasam Bani in various of his writings. Some of his views on Dasam Bani are shared below:

The Jaap Sahib composition has the same place in the Dasam Granth as the Japji Sahib has in the Guru Granth Sahib. Jaap is the bani (set of hymns) uttered by Guru Gobind Singh, the tenth Sikh Guru. It is one of the five banis (5 compositiions) recited by most practising Sikhs each morning and the bani that the Panj Pyare recite while preparing Amrit.

Professor Sahib Singh has written on the first page of this book that it this bani of Guru Gobind Singh is given to the Sikhs as a part of Rehit (Sikh principles or "discipled way"). Read this book online

In 1941, he explained with help of Asi Guru Granth Sahib and various banis of Dasam Granth like Shastarnam Mala, Bachitar Natak, Bhagauti Astotar and other banis that Chandi is not any lady or idol and Guru Gobind Singh call chandi a formless entity, i.e Shakti (power) of God. Article is attached below:

Usage and Information of Dasam Bani in Various Writings 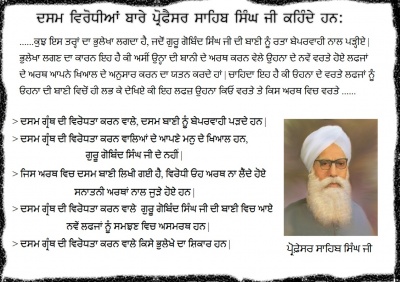