The list of noted Sites related to Creation of Banis present in Dasam Granth Sahib.

Paonta Sahib is a small beautiful town in the south of Sirmour district in the Indian state of Himachal Pradesh.National Highway 72 goes through this town. It is an important religious spot for Sikhs and a bustling industrial town where major industries are cement (Cement Corporation Of India (CCI), Rajban), pharmaceuticals (Ranbaxy Pvt ltd,mankind pharma ltd), textiles (Malwa cotton and spinning mills of Oswal group), chemicals & food(Mushroom Factory) 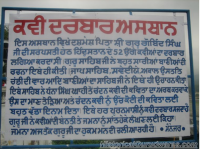 The historical site commemorates Guru Gobind Singh's activities related to literary work including most of compositions of Dasam Granth Sahib. Guru Gobind Singh ji, the tenth guru of sikhs was the person in whose memory the Gurdwara of Paonta Sahib was built. It was here, the Dasam Granth was written by Guru Gobind Singh Ji. It is because of this fact, the Gurdwara enjoys a very high historic and religious importance among the followers of the Sikh religion across the worldover. Shri Talab Asthan and Shri Dastar Asthan are the vital places inside the Sikh shrine worth mentioning.

Kavi Darbar, a prominent place near the Gurudwara is the venue for holding the poetry competitions. The weapons and pens used by Guru Gobind Singh Ji are displayed in a museum near the Poanta Sahib Gurudwara.

The Gurdwara Sahib is situated in outer of village Dyalpura Bhai Ka in Distt Bathinda. When SHRI GURU GOBIND SINGH JI was staying at Village Dina in Bhai Desu Ji's residence, In day time GURU SAHIB used to come here. As this place was dense forest, GURU SAHIB wrote Zaffarnama Sahib here and at Village Dina. Here only Sikhs were again assembled after the Fight of Chamkaur Sahib. And Sikhs used to pratice for the future also.

Zafarnāmah means the Epistle of Victory and is the name given to the letter sent by the tenth Sikh Guru, Guru Gobind Singh Sahib in 1705 to the Mughal Emperor of India, Aurangzeb. The letter is written in Persian verse. It is believed that Hikayats were also part of Zafarnama which was written at same place. The purpose of Stories in Hikayat is to tell Aurangzeb, about Trust and Wisdom. Zafarnamah is present in the end of Dasam Granth Sahib including Hikayats.

Gurudwara Shri Charan Kanwal Sahib Machiwara is situated in the Machiwara town of Ludhiana Distt. After Martyrdom of his two Sahibjadas and few sikhs GURU GOBIND SINGH JI left the fort of SHRI CHAMKAUR SAHIB and reached village CHUHARPUR and sat to relax under tree, Where GURUDWARA SHRI JHAR SAHIB is situated. From there he came to the jungles of MACHIWARA SAHIB. GURU SAHIB reached near well. he drank water from that well then took tind (a Pot which draws water from well) and used it as pillow under JAND tree to spend his night. That old jand tree is still present. Here while remembring God GURU SAHIB Recited the Shabad