Nawab Wazir Khan of Sirhind had felt concerned at the Emperor's conciliatory treatment of Guru Gobind Singh ji. Their marching together to the South made him jealous, and he ordered two of his trusted men with murdering the Guru before his increasing friendship with the Emperor resulted in any harm to him.

These two pathans Jamshed Khan and Wasil Beg are the names given in the Guru Kian Sakhian pursued the Guru secretly and overtook him at Nanded, where, according to Sri Gur Sobha by Senapati, a contemporary writer, one of them stabbed the Guru in the left side below the heart as he lay one evening in his chamber resting after the Rahras prayer. Before he could deal another blow, Guru Gobind Singh struck him down with his sabre, while his fleeing companion fell under the swords of Sikhs who had rushed in on hearing the noise. As the news reached Bahadar Shah's camp, he sent expert surgeons, to attend to the Guru.

The Guru's wound was immediately stitched by the Emperor's European surgeon and within a few days it appeared to have been healed. The injury had been contained and the Guru had made a good recovery.

Some Karigars from Hyderabad(Silkigars) came to guru sahib and gave shastars to guru ji and guru ji gave them return gift. There were many bows whoose strings were very difficult to tugged. On Deepmala Rich people of Nanded came to guru ji With Karah Parshaad. Guru ji was with his arms on his bed. After watching all this one said that who tugs the bow these days? Other said "Are these weapons just for showoff?". One requested to Tug the arrow and make his fullfill true. Guru Ji was not fully improved. but to fulfill his wish, when the Guru tugged at a hard strong bow, the imperfectly healed wound burst open and caused profuse bleeding. All were stunned to see that. They began to tie bandages to top blood. It was again treated but it was now clear to the Guru that the call of the Father from Heaven had come. He prepared the sangat for his departure; instruction were given to the immediate main Sewadars and finally he gave his last and enduring message of his mission to the assembly of the Khalsa.

He then sang his self-composed hymn: "Under orders of the Immortal Being, the Panth was created. All the Sikhs are enjoined to accept the Granth as their Guru. Consider the Guru Granth as embodiment of the Gurus. Those who want to meet God, can find Him in its hymns. The Khalsa shall rule, and its opponents will be no more, Those separated will unite and all the devotees shall be saved."

On that Day langar was served as gurgaddi was transferred, Different varities of food was served

Setting His Own Pyre 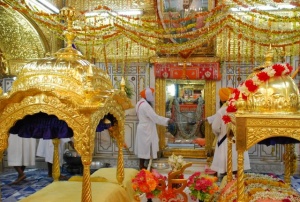 Guru Ji then spent money to set his on pyre(Angeetha). Bhai Daya Singh, Bhai Dharam Singh, Bhai Santokh Singh and Bhai Himmat Singh collected Sandal Woods and make pyre. then they covered that area with walls. Guru Ji said that after setting fire to his pyre no one is supposed to open Angeetha Sahib. No one was suppose to see in angitha sahib. No one is suppose to make any Samadh after his death.

On Next morning, people from all over came to watch guru ji as on that day guru sahib was leaving his heavenly abode. People of every class came for darshan of guru gobind singh. It was a huge crowd, guru Sahib gave darshan to all in his roop.

Then guru sahib started going toward his pyre. People started crying all weep out loud. Guru Ji stopped and said not to love with BODy. Love with Shabad love with teachings and live together forever n ever.

After this guru ji entered in closed structure in which pyre was established. Many People were weeping and watching the flames broke out from inside. The Flames were rising high.

After this sikhs was began to check that Dilbag the Guru's horse is missing.

Bhai Sangat Singh was coming to hazur sahib at that point of time. He met guru sahib, with his Attire, Eagle, Horse, on his way near Nanded. Guru ji gave him orders of being a true sikh. Even he was given Karha parshaad by guru ji. After Darshan of Guru Ji Bhai Sahib went to Hazur sahib.

Sangat said that Angitha is on fire and guru sahib is no more. Bhai Sangat singh surprised and said that he just met guru sahib in his full attire with horse and eagle even he took parshad from him. Sangat bewilderd. 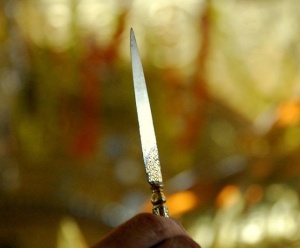 Small Sword Which was taken out from GUru's angitha

Bhai Daya singh went inside to check angeetha, there was nothing but a Small Kirpan in angeetha. So everyone accepted Bhai Sangat SIngh that Like Guru nanak Dev, Guru Gobind Singh also went to Sachkhand with his body. Guru Sahib said not to make any place but love of singhs was so much they make a samaadh and recited kirtan aside this samadh. That place is today and historical shrine and takhat called takhat Hazur Sahib.