Most of the spiritual messages of Bhagat Namdev Ji, just like those of the Sikh Gurus, emphasized the importance of living the life of a householder (grist jeevan). His belief was that through marriage and having a family, one could attain enlightenment. He emphasized that the truest form of bondage or devotional meditation is to enter matrimony and jointly seek the holy experience of God or Waheguru.

Namdev was married before he was eleven years of age to Rajabal, daughter of Govinda Sheti Sadavarte. They had four sons and one daughter. Janabai, the family's maidservant and a bhagat and poetess in her own right, records the tradition that Namdev was born to Gonabai as a result of her worship of Vitthala in Pandharpur. This present temple building was constructed by Sardar Jassa Singh Ramgarhia and the tank by its side was repaired by Rani Sada Kaur, mother-in-law of Maharaja Ranjit Singh.

God's name was always on the lips of Bhagat Namdev Ji. He was asked by the king to show miracles. He refused to do so and was thrown before a drunk elephant to be crushed to death. God saved His own saint. When the Fifth Guru, Guru Arjan dev compiled the Guru Granth Sahib, he decided to give some recognition to the saints of the Bhakti movement. This is the reason that Guru Granth Sahib contains verses of fifteen such saints. In some cases Guru Granth Sahib is the only voice remaining for such saints over the years. 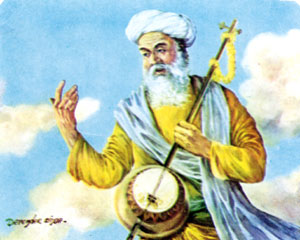 Under the influence of saint Jnanadeva, Namdev was converted to the path of bhakti. Vitthala of Pandharpur was now the object of his devotion and he spent much of his time in worship and kirtan, chanting mostly verses of his own composition. In the company of Jnanadeva and other saints, he roamed about the country and later came to the Punjab where he is said to have lived for more than twenty years at Ghuman, in Gurdaspur district, where a temple in the form of samadh still preserves his memory.

In his early fifties, Namdev settled down at Pandharpur where he gathered around himself a group of devotees. His abhangas or devotional lyrics became very popular, and people thronged to listen to his kirtan. Namdev's songs have been collected in Namdevachi Gatha which also includes the long autobiographical poem Tirathavah.

His Hindi verse and his extended visit to the Punjab carried his fame far beyond the borders of Maharashtra. Sixty-one of his hymns in fact came to be included in the Sikh Scripture, the Guru Granth Sahib. These hymns or shabads share the common characteristic of lauding the One Supreme God distinct from his earlier verse which carries traces of idolatry and saguna bhakti. In the course of his spiritual quest, Namdev had, from being a worshipper of the Divine in the concrete form, become a devotee of the attribute-less (nirguna) Absolute.

Bhagat Nam Dev is a pioneer of the Radical bhakti School. Though he appeared a century earlier than Kabir, his religious and social views are very much like those of Kabir. He unambiguously repudiates all the four fundamentals of Vaisnavism. Though in his devotional approach, he is clearly a monotheist, he makes many pantheistic statements too, e.g., every thing is God; there is nothing but God; consider the world and God to be one; the foam (froth) and the water are not different. Chaturvedi writes: "Sant Namdev seemed to believe both in transcendence and immanence, in pantheism and nondualism.

His devotion was purely of the non-attributional absolute. He also considers God to be immanent, everywhere, in all hearts, and the Creator of everything. Like Kabir and the Sufis, Namdev is very other worldly . He says, "The strength of contempt of the world should be in the body an unchanging companion.

Message of Unity for all 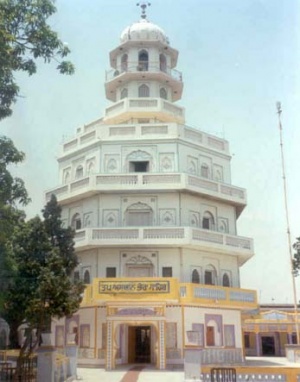 One should lay aside differences between oneself and others, and feel no anxiety for things of the world. Ranade also writes: "He (Namdev) tells us that it is impossible that the pursuit of God can be coupled with a life of Samsara. If it had been possible for a man to find God while he was pursuing Samsara, then Sanaka and others would not have grown mad after God. If it had been possible for him to see God while carrying on the duties of a householder, the great Suka would not have gone to the forest to seek God. Had it been possible for people to find God in their homes, they would not have left them to find out. Nam Dev has left all these things, and is approaching God in utter submission." (Abhg. 83)

Namdev's cosmogenic views are also orthodox. He says that God created maya and "maya is the name of the power that placeth man in the womb." Indirectly, he is neither happy with the world, nor with human birth. To him, shop, shopkeeper, men and everything are unreal except God. Against this background he sought release from the world and suggested renunciation: "Namdev gave up trade, and devoted himself exclusively to the worship of God".

The world being a play of maya and not being a worthwhile arena for spiritual endeavours, Namdev's goal was to have union with God through devotion and singing His praises. He says, "I perform worship, sing God's praises and meditate on Him for eight pahar in a day i.e, round the clock. At the same time, he suggests good conduct and purity of life. For, God created all men alike. Though he holds every person responsible lor his acts, he clearly does not believe in a world rigidly governed by karma. Because he says: If everything were determined by karma, who created karma originally?

Namdev not only claims union with God, but, like Kabir, also states that more than once God miraculously intervened on his behalf to reveal Himself to him, or help him. Without doubt, Nam Dev's approach remains otherworldly both before and after his achievement. At one time, he even gave up work so as to remain absorbed in his worship and meditations. He never initiated any religious institution or movement. His was a solitary search for God, without creating any social or religious organisation.

We find that in his repudiation of Vaisnava doctrines, in his metaphysical ideas, methodology and goal, and more particularly in his otherworldly approach to the world and society, Namdev's views are quite identical with those of Kabir.

The shabad by Bhagat Nam Dev in the Siri Guru Granth Sahib where the temple rotated towards his direction as he was not allowed to sit in there. 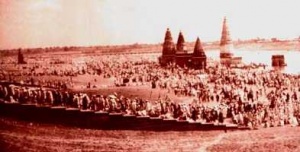 Temple in Pandharpur, where the Eastern entrance is called Namdev Gate

The eastern entrance to this temple is known as the Namdev gate (after the great 13th century Vaishnava saint). The sanctum enshrines the standing image of Vithoba also known as Panduranga, Pandhari or Vitthala. Stylistically the image dates back to the 5th century. There are inscriptions in this temple dating back to the 13th century which place origin of this shrine to the 6th century.

Bhagat Namdev is referred to as a chhimba, "cẖẖīpro", "Cẖẖīpė" and "cẖẖīpĝ". This refers to Bhagat ji's profession as a printer of cloth. Chhippas were calico printers/artists and used to decorate, colour and print textiles with art work. Some of them were also tailors as this was a profession connected with clothes.

Bhagat Namdev's Bani of 61 Shabads can be found in the following ANGs (pages) of Guru Granth Sahib: 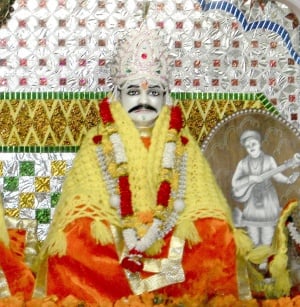 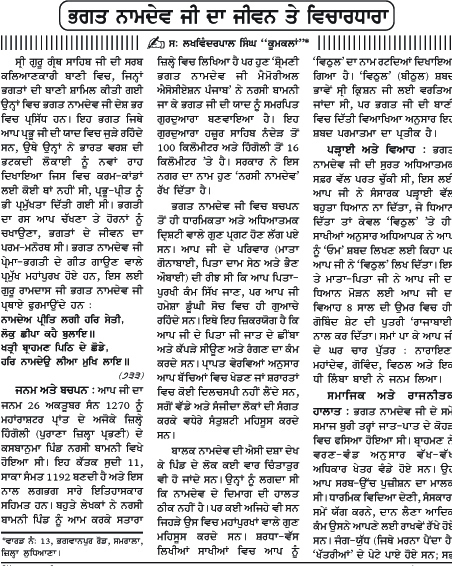 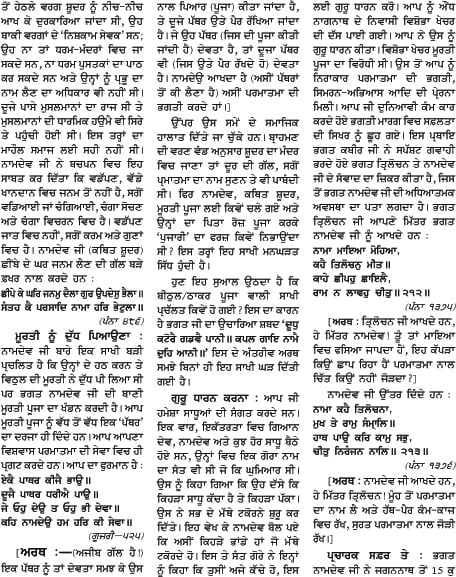 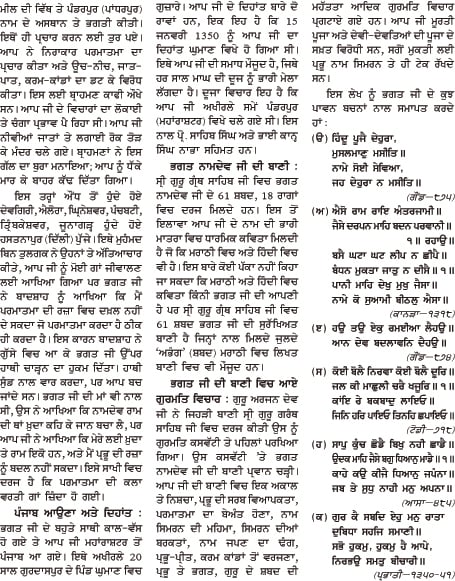