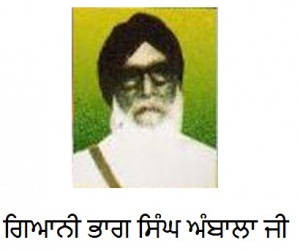 Gyani Bhag Singh was a writer and Sikh preacher, who was excommunicated from Sikh Panth for his controversial book Dasam Granth Nirney.

Bhag Singh was born at Village Liloan Vala, Distt Jhangg in Pakistan in Hindu family, and was called Bhaag Mall. His family use to follow all hindu customs and traditions, though he was hinduhe was against all ritualism and ritualistic practices. After few years he joined company of Scholars where he learned many granths like Ramayana, Mahabharata etc. He also studied gurbani with them.

As he was not wishing to die as a Non Sikh. He took his words back and apologize to Akal Takhat for his blasphemous act.