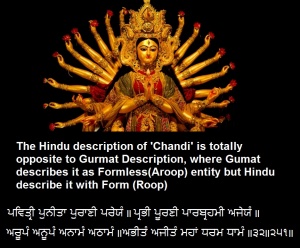 Chandi is term of Brahmgyan, which is used as character of Gurmukh in Second Granth of Sikhs, Dasam granth. Chandi is one who fights with demons and finish their existence. Chandi is Will power(Icha Shakti)/Command of God. It is also called Gurmat, which fights with Manmatt. In Hindus and Anti Dasam People's dictionary Chandi is some diety having eight hands, who sits on lion and is a physical body. But in Gurmat it's not any physical body. There are many other names of Chandi like durga, durgshah, kali etc. In Chandi Charitar 1 of Charitropakhyan, Guru Gobind SIngh give many names to Command of god.

In whole four Charitars only Command Hukam, Icha Shakti of Lord is explained in details, how it fights with manmatt, in martial style. The person who is going to study these must know what ETYMOLOGY is else he will not able to interpret these easily.

First Twelve Lines are about Definition of Word Chandi. After this basic explanation Author have explained the Character(Charitar) of Chandi:

Thou Who Ferries across people, Redeemer of Earth and Destroyer of Demons is Chandi.

Chandi is Light(Joti) shining in the world, which is Blazing, cut Heads, and Shine intensely!

Chandi is Arm which punishes and destroys Demon and art the Creator of the nine regions.3.

Chandi means "the violent and impetuous one".[1] In Gurmat, Chandi is attributed to intuitive and discerning mind called Vivek Budhi[2] which fights with negativity.

In contrast, Sakar Hindus and the anti-Dasam Granth people[3] portray Chandi as a lady having physical appearance: a combination of Mahakali, Mahalakshmi and Maha Saraswati.

The description of eight attributes are here under:

Now it's clearly mentioned in first line of Chandi Charitar by Guru Gobind Singh, his own interpretations and defination of Chandi. How could we think it's osme physical form Diety.

In Chandi Charitar Ukat(i) bilas where defination of Chandi is clear, there Guru Gobind Singh also explained what chandi do and how it flows in world. Chandi act's on living = Chetan.

This Jyot is Chand = Powerful, Chamund = CHa + Mund = Which cuts Mund(Ego) and blazing.

Now Gurmat is one which makes person NIRBHAI which gives delight and gives Parmanand. So Concept of Chandi are explained well by Gurmukhs.

ਰਚੋ ਚਰਿਤ੍ਰ ਬਚਿਤ੍ਰ : Going to explain it's behavior, What it does when became visible in world. How it gives marvelous job with mind and soul. Which weapons it shots while fighting with heart and soutl of self and other.

ਤੁਅ ਕਰੋ ਸਬੁਧਿ ਪ੍ਰਕਾਸ : Guru Gobind Singh is seeking god's permission before writing his commands, what actually his Will power do and how it acts in world.

Polymelia is birth defect involving limbs, in which the affected individual has more than usual number of limbs but in realm of religion multiple organs have symbolic meanings like 10 Heads of Ravana symbolize his knowledge of 6 Shashtras and 4 vedas.

In Kirtan Sohila, Sahas Tav Nain hai toye ko, Sahas Moorat Nana Ek Tohey tells that he have thousands of eyes but he is not a physical body. Similarly, God is featured as Keshva (Long Hairs - The far sight), Chakardhar (The holder of Chakra), Maladhari etc which has symbolic meaning and qualities for formless entity. Similarly, Eight hands of Chandi and depicting it as a woman, Sitting on lion, is purely symbollic in nature.