From SikhiWiki
(Redirected from Chobis Avatar)
Jump to navigationJump to search

The Ath Chobis Avtar Kathanang(PA: ਅਥ ਚਉਬੀਸ ਅਉਤਾਰ ਕਥਨੰ), commonly known as Chaubis Avatar or Avtar Bani, is the narrative of the works and life of twenty-four incarnations, penned down by Guru Gobind Singh, present in Dasam Granth. This narrative is technically part of Bachitar Natak, but is entirely independent composition in case of Subject.

In Daily Sikh Liturgy, A Swaiya and a Doha forms important part of recitations in Nitnem Banis, which are taken from Rama Avtar (verse 863/864).

This narrative is brilliant piece Literature having all Historical, Secular, Philosphical, Spiritual, Maritial Flavour. This narration tells the history of Dharma and changes occurred in Dharma with passage of time. Guru Gobind Singh does not believes in supremacy of any of twenty four incarnations and belief in Supremacy of Supreme Command only. 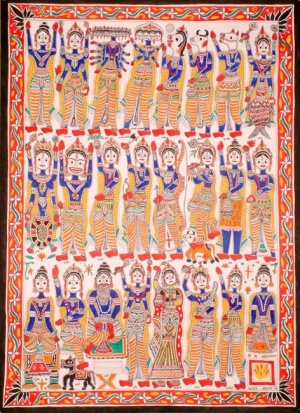 Concept of Avtar in Gurmat

The introductory thirty-eight chaupais or quatrains refer to the Supreme Being as unborn, invisible but certainly immanent in all objects. Whenever evil predominates, saviours of the humanity or avatars emerge by His hukam, i.e. order, to reestablish righteousness. They fulfil His will and purpose. Akal Purakh who creates them ultimately subsumes them all in himself. The poet asserts his monotheistic belief here and while enumerating the avatars discountenances any possibility of their being accepted as the Supreme Being, i.e. Akal Purakh.

The aim of writer was not to worship any of incarnations but to enlighten the world about these incarnations:

The summary of this Bani is narrated by Gobin Sadan at:


According to hymns in Adi Gur Granth Sahib, Dasaavtar were Kings of their Times and were born under Supreme Command(Hukam).

Out of 24 Ten incarnations are mentioned in Guru Granth Sahib. Bhatt Gayand also mentioned Dashavtar in his hymn

24 Avtars of Vishnu are mentioned in Bachitar Natak composition in Dasam Granth, the second scripture of Sikhs written by Guru Gobind Singh:[2]

Before describing these avtaras, the composers have written that these tried to equate themselves with god and unable to know secrets of almighty.

The Line itself clears, 10 Incarnations were Kings of their time. It gives a big clue, that Priests of those time gave the Title of Avtars. Gurus haven't mentioned them Avtar of Vishnu or Brahma. Question is why it was need of mentioning.

In Dasam Granth, Guru Gobind SIngh mentioned the same philosphy of Gurmat as

Hereunder are the 38 Introductory Points of the 24 Avtars, as stated by Sri Guru Gobind Singh Jee, which should ever be kept in Mind while examining the translations of Hindu Sacred Books made by the Guru and included in Sri Dasam Granth. It was due to these translations of Hindu sacred books of Hindus having different approach from the Sikh; the Guru decided that his Compositions to remain separate from Sri Guru Granth Sahib Jee. These translations make a Sikh to appreciate GURMAT more clearly than otherwise, if any one would read judiciously.

One of Message for sikhs

The 24 Avtars are the incarnations of god Vishnu, who himself was full of limitations. These three Trinity gods, Brahma, Vishnu and Shiva had their weaknesses; they even committed crimes, told lies and indulged in adulterous affairs. Points 1 –6, 32 and 29 given above are Most Important. KAL is GOD, Who subsumes all the Creation. In Sri Guru Granth Sahib it is repeatedly stated that there is NO OTHER DESTROYER EXCEPT GOD. God’s Light (Jot) in all creatures, we call it Guru, Satguru and Satguru Poora; verily God Himself. Here the Guru states goddess Chandi , Bhaviani, Durga, Bhaawati, Kali, etc. are none else but God’s Light (Jot), which created the Universe, the Immanent or the Functional God, as part of the Transcendent God. This will explain the Guru’s version of Chandi Chritrars. Chandi or God’s Light or God in Man fights with the temptations of the instinctual passions, depicted as varied names of Demons.