Chandi Charitar Ukat(i) Bilas is a narration present in Second Scripture of Sikhs, Dasam Granth, written by Guru Gobind Singh. This narrative contains War of Wisdom between Gurmati and Manmati. All Deamons are shown against existence of Hukam or have no clear vision of Gurmat, are called Manmatt. Chandi is shown as Gurmukh who show demons and deities the true path of God. Deities are shown those which have only faith in God, but are not clear with concept of god.

Source of Characters: Like Gurbani have picked many words from vedas, katebas and other granths, to explain Brahmgyan like [[Murari], Gobinda, Ram, Kanha, Garurh etc. Guru Gobind Singh picked characters of brahmgyan and concept from Markandya Puran. He Clearly mentioned in end the name of granth from where he picked Characters, but whole glory of Chandi is explained in Guru's own style. Only Gurmat dictionary is to be apply on these charitars of Chandi to get real essence of these compositions as it is written by Gurmukh.

Guru Gobind Singh gave the bani maritial spirit and shown the discussion of wisdom in form of war or battle. All Deamons are negative powers(Manmatt), which fight with Chandi(intuitive and discerning mind = Gurmat(i)) and loss in battle of wisdom. It's very difficult to understand the bani, as knowledge of Gurmat will help person to get clear the aspects of bani. Guru Granth Sahib says:

It is in Braj Language. One of these compositions is known as Chandi Charitra Ukti Bilas whereas the second has no qualifying extension to its title i.e generally called Chandi Charitar 2, except in the manuscript of the Dasam Granth preserved in the toshakhana at Takht Sri Harimandar Sahib at Patna, which is designated Chandi Charitra Trambi Mahatam.

Ukat(i) bilas is divided into eight cantos, comprises 233 couplets and quatrains, employing seven different metres, with Savaiyya and Dohara predominating. In the former, the source of the story mentioned is Durga Saptasati which is a portion of Markandeya purana, from chapters 81 to 94.

It was composed at Anandpur Sahib, sometime before AD 1698, the year when the Bachitra Natak was completed. The concluding lines of the last canto of Chandi Charitra Ukti Bilas as included in the Dasam Granth manuscript preserved at Patna, however, mention 1752 Bk / AD 1695 as the year of the composition of this work.


The miraculous feats of Chandi have been composed earlier 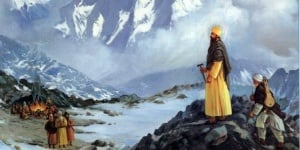 A person having Gurmat dictionary can only understand bani of Guru Gobind Singh, a gurmukh cannot apply Brahmin's dictionary on it, let's discuss basic terms in light of Gurmat and their etymology:

Characters of Internal Soul which is split(Bhang) due to delusion, the splitted parts are positive(Chitt) and Negative(Mann) and Mann could not recognize Dharma and Hukam. The qualitative aspect of such souls are present in Chandi Charitar which are here under:

Views of Hindus and Anti Dasam People on this bani

Hindus and Anti-Dasam persons treat Chandi as some female diety. According to them Chandi is diety which live somewhere in kailash and when other Dieties face any problem from deamons, She come out and help them. Their interpretation have no relations with Gurmat and spirituality. They think Chandi as some goddess having lion beneath it and have eight hands carrying different weapons. Hindus treat them diety and worship her but Anti Dasam only treat her goddess, but do not worship it.

Gurmukhs have very different view on Chandi, totally against these two groups who had misinterpreted Chandi for sake of money or ignorance.