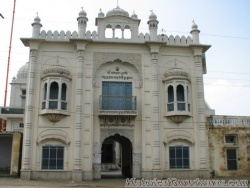 Gurdwara Reru Sahib, is situated on the outer skirts of the village, Ramsar to the east, in Ludhiana District of Punjab, Tehsil Doraha; standing in the interior of the Malva Region. The Tenth Sikh Guru, Guru Gobind Singh Ji (1666-1708), while travelling from Machiwara on the Manji, as Uch Da Pir with his three Sikhs and two muslim brothers visit this village.

Bhai Daya Singh, Bhai Dharam Singh and Bhai Maan Singh, and two Muslim devotees Nabhi Khan and Ghani Khan who had served the Guru by carrying the Manji along with the three Sikhs stayed at Rampur village in the year 1705, Guru Sahib stopped and rested under the Reru tree (Mimosa leucophloea). At that time a village Jatt farmer named Bhara, when came to know about Guru Sahib's visit, came here and served Guru Sahib with fresh milk.

Sant Baba Attar Singh (1867-1927), while on leave from his army regiment, he visited Rampur. Here, he found the old historical shrine, Reru Sahib, commemorating Guru Gobind Singh's brief halt under a Reru tree (Mimosa leucophloea) during his journey from Machiwara towards the Malva country in December 1705. Seeing the site in such a dilapidated state he became determined to have it rebuilt.

During his next leave, in 1901, he with the help of the local sangat (congregation) reconstructed Manji sahib, the inner sanctum. He spent his leave periods expanding the building and, after his retirement on 18 October 1907, he settled permanently at Rampur. He developed Guru ka Langar, and initiated monthly congregations on full-moon days. He also opened a school where young boys, especially the poor and the blind, were imparted instruction in scripture reading (Paath) and Kirtan or hymn-singing with a view to training them as future preachers of Sikhism.

After 20 years of service, Sant Attar Singh died at Gurdwara Reru Sahib on 21 January 1927. He was succeeded by Sant Bhagvan Singh (d.1975) who kept the Reru Sahib legend alive, He got reconstructed the present day building of Reru Sahib Patshahi Dasvin.