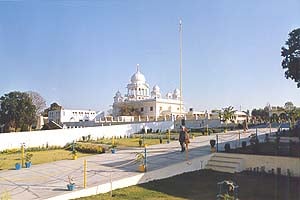 Gurdwara Charan Kanwal at Machhiwara marks the site of the garden where Guru Gobind Singh had a sip of water and a spell of brief sleep. It was here that his three devotees Bhai Mani Singh, Bhai Daya Singh and Bhai Dharam Singh joined him. The sacred shrine commemorating the historical event, has a beautiful building, worthy of the holy tradition. An annual congregation fair is held in December, corresponding to 9th & 10th of Poh, the days of Guruji stay at Machiwara.

Another shrine popularly called Gurdwara Chubara Sahib is located at Machhiwara. Here at the house of Masand Gulaba where the Guru spent the night. The place is known as 'Gulaba da Chubara'.

It is here that the Guru sang the shabad "Mitra Pyare Nu". The Gurdwara is supplied water from the same well believed to be the one from which garden was watered during those days. An annual congregation fair is held in December, corresponding to 9th & 10th of Poh, the days of Guruji stay at Machiwara.

Gurdwara Charan Kamal Sahib is situated on Charan Kamal Road in the city of Machiwara, near Bus Stand. It is connected by road to Ludhiana-Chandigarh highway at Samrala (42 km) and to Ropar (46 km) by Guru Gobind Singh Marg.