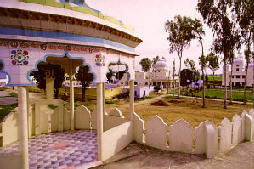 Guru Gobind Singh stayed at Raikot which was the headquarter of the Pathan Chief Rai Kalla. He was a devoted follower of the Guru and a close relative of Nihang Khan of Ropar. He looked after the comforts of the Guru like a true and faithful disciple. Under order of the Guru, he sent his man Nura Nabi to Sirhind to enquire about the welfare of the Guru's younger sons and his mother Mata Gujri. Rai Kalla with tears in his eyes, narrated to the Guru the sad story of the immortal martyrdom of his two younger sons Baba Zorawar Singh and Baba Fateh Singh as also of Mata Gujri. The Guru remarked that they were the gift of Akal Purkh (Almighty God) and have gone back to him.