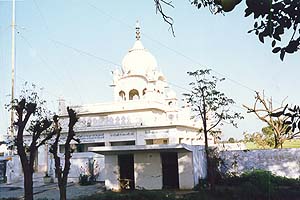 This gurdwara marks the site graced by two Gurus. Guru Hargobind Sahib Ji and Guru Gobind Singh Ji. Guru Hargobind Sahib Ji spent a night here. A leper came to Gurji and requested him to relieve his pain. Guruji adviced him to take lather from horse's mouth and rub it on body. Then take bath in the pond. The leper did as directed by Guruji and got rid of his disease. Since then many devotees who want to get rid of boils, pimples they take bath here. When Guru Gobind Singh Ji desguised as the Pir of Uchch and carried in a palangier, was passing by this village, he was stopped by the Imperial mobile patrol. The commander of the patrol suspecting that the Pir might in fact be the Guru, stopped and interrogated the party. Sayyid Pir Muhammed of Nurpur, who had been Guruji's Persian tutor, testified that the personage inside the palanguin was a most exalted Pir and the party was allowed to proceed. Prakash Utsav of first, sixth and tenth patshahis are celebrated here. Location Gurdwara Gurusar Sahib is situated in village Lal Kalan 0.5 Kms. from Nilopul which is on Chandigarh-Ludhiana Road. This village is 10 Km. west of Samrala.