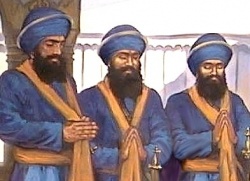 Bhai Dharam Singh (3 November 1666 - 1708) had been a farmer when he answered a request of Guru Gobind Rai, which lead to his becoming one of the Panj Piare (the Five Beloved), the first five Sokhs to be initiated into the Khalsa). He was the son of Bhai Sant Ram and Mai Sabho, of Hastinapur, an ancient town on the right bank of the Ganges, 35 km northeast of Meerut (29°N, 77° 45'E) near modern New Delhi.

Dharam Das, as he was originally named, fell into the company of a Sikh who introduced him to the teachings of the Sikh Gurus. He left home at the age of thirty in quest of further instruction. At the Sikh shrine of Nanak Piau, dedicated to Guru Nanak, he was advised to go to Guru Gobind Rai at Anandpur, where he arrived in 1698.

In 1699, during the historic Baisakhi congregation at which five Sikhs, responding to five successive calls of Guru Gobind Singh, Dharam Das was one of the five brave Sikhs who offered, one after the other, to lay down their heads. The Guru blessed them and called them Panj Piare, the five beloved of him. They were anointed as the first five members of the brotherhood of the Khalsa that was inaugurated on that day. Guru Gobind Singh then begged them to administer to him the vows of initiation.

Dharam Das, who, after initiation, became Dharam Singh, took part in the battles of Anandpur. He was in Guru Gobind Singh's train when Anandpur and thereafter Chamkaur were evacuated. He accompanied Bhai Daya Singh to the South to deliver Guru Gobind Singh's letter, the Zafarnamah, to Emperor Aurangzeb.

In Support of Prince Mua'zzam

During the war of succession following the death of Aurangzeb on 20 February 1707, Guru Gobind Singh, siding with Prince Mua'zzam in his quest for the Gaddi (throne) of the Mughal Empire, sent for the help Bhai Dharam Singh who with his small band of Sikhs fought in the battle of Jajau (8 June 1707). He was one of the Sikhs who accompanied Guru Gobind Singh to Nanded and was with him when Guruji physically departed from this world.

Dharam Singh died at Nanded, where today a gurdwara preserves the memory of both Bhai Dharam Singh and Bhai Daya Singh, two of the original Panj Piare.