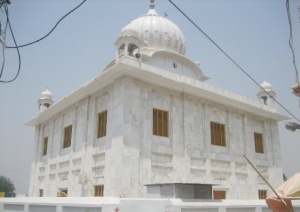 Gurdwara Chaubara Sahib is situated in the Machiwara Sahib town in Ludhiana District. The Tenth Paatshah came to this place from Gurdwara Charan Kanwal Sahib. The attic in which he stayed belonged to Gulaba and Punjaba who had, in the past, supplied rations to the Guru's family at Anandpur. It was in answer to their request that he accept their home as shelter that the Guru had come to their house.

Mata Herdeyi, who had offered a piece of hand made clothing every year to the Guru at Anandpur Sahib, had not been able to offer her annual piece of clothing for quite sometime. Her advancing age had made the trip to Anandpur very difficult for her. Mata ji, humbly offered her clothing and was very pleased as the Guru gladly accepted her offering. The Pathan Gani Khan and his brother Nabi Khan lived in the same city, Gani Khan had earlier offered a horse to the Guru at at Anandpur Sahib. When the brothers learned that the Dasvin Patshah had come to their city, they took the Guru to there house where they served him with great pleasure.

Meanwhile, those who had set themselves against Guru Gobind Singh, were following him in hot pursuit and had reached Machhiwara. Gani Khan Nabi Khan after some discussion decided to disguise the Satguru as the Uch Da Peer and by palki to carry him far away to safety. Gani Khan Nabi Khan gave the clothing which Mata ji had offered, to the dyer in order to get it colored but the dyer complained that the color was not ready yet, saying it was still 'raw'. The Guru asked his Pathan hosts to tell the dyer that the color was ready, saying "just put the clothing in, it will surely be colored". As had happened earlier the clothing was dyed, only this time it was much better than before.

Seeing this the dyerwalla fell at the feet of the Guru who blessed him saying that from now on he would only need fill his matt with water and add the cloths or cloth to be died, adding that there would be no need to purchase or prepare any expensive coloring from that day foward. He finished by saying that all he had to do was think of the desired color and with Satguru ji's blessing the clothes would be colored as desired. That same matt (a large earthen pot) still exists at the Gurdwara for all believers and devotees to see.