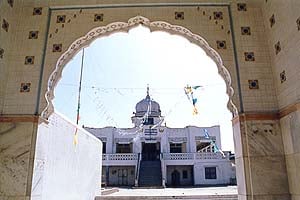 Gurdwara Manji Sahib, is situated 20 Kms. South-east of Ludhiana City, a village Kanech. It is 1.5 kms. from Grand Trunk Road and 4 Kms. from Sanewal Gate near Rampur.

After leaving Machiwara, Guru Gobind Singh Ji stayed here for a shortwhile. He was on his way into interior of Malwa in December 1705. He was disguised as Pir of Uchch and was travelling in Palanquin borne by his devotees. Guruji wanted to relieve them and to travel on horseback. A local farmer, Fatta by name, came to pay homage and offered to render any service he would command. Guruji asked him to lend him a horse. Fatta went and brought a gaunt mare. The Guru rejected it and said that nothing except his best horse would do. Fatta's was made a false excuse that the horse has been taken away by his son-in-law. The Guru smiled and resumed his journey in the Palanquin. When Fatta returned home he saw his horse dead bitten by a snake. Gurpurabs of first, fifth and tenth patshahis are celebrated here. Also Shahidi Divas of Guru Tegh Bahadur is organised here.