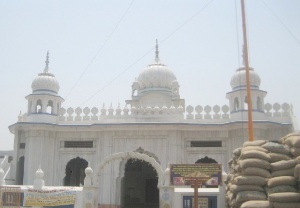 Gurdwara Uchch Da Pir is where Guru Gobind Singh had left Machhivara disguised as a Muslim pir (divine), carried in a palanquin and declared by Ghani Khan and Nabi Khan to be the Pir of Uchch, an old seat of Muslim saints in southwest Punjab. Gurdwara Uchch da Pir was established after 1947 in the private house formerly belonging to the descendants of the brothers Ghani and Nabi Khan. The Guru Granth Sahib is seated in a small rectangular room. A double-storeyed cell in this house is also being maintained in memory of Guru Gobind Singh. It is believed that he stayed here for a short while after shifting from Gulaba's house.

GURUDWARA SHRI GANI KHAN NABHI KHAN is situated in the Machiwara Town of Ludhiana Distt. This holy land of Machiwara Sahib was once traversed by Guru Gobind Singh who came here from Gulabe & Punjabe's house.

Gani Khan and his brother Nabi Khan were well aware of the danger that Guru Gobind Singh was in, yet even though they were Muslims their respect for the Sikh Guru were such that they risked certain death, if caught, and traveled to meet with him asking him to come to the safety of their home.

Along their way they noticed that there were way too many informers roaming around so they suggested that the Guru should have his clothes colored blue, as it would be easier and far safer for them to travel. And so a dyer was called for who carried out the dyeing for the Guru.

Other Gurdwaras near here

The place where the dyer got happy and went away, GURUDWARA CHAUBARA SAHIB exists on that place which is around 500 yards from this place where you can visit & see the Matti sahib.

Gani Khan Nabi Khan requested that even they do not have any child to which SATGURU JI said that your service has already been accepted & whatever blessings were given are listed in the HUKAMNAMA. DASHMESH PITA stayed at this place for 2 days & 2 nights. From this place, GURU JI along with Gani Khan, Nabi Khan, Bhai Daya Singh Ji, Bhai Dharam Singh Ji, Bhai Maan Singh Ji went to GURUDWARA KIRPAN BHET SAHIB in a Paalki, which is about 2 kms away from this place, going through GURUDWARA KATANA SAHIB via village Rampura Kanech went towards Alamgir.

Note: SHRI GURU GOBIND SINGH JI, while accepting the service of Gani Khan and Nabi Khan, gave this HUKAMNAMA to him at GURUDWARA ALAMGIR SAHIB. The photocopy of the same has been kept at GURUDWARA GANI KHAN NABI KHAN.