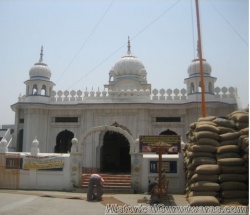 GURUDWARA SHRI GANI KHAN NABHI KHAN is situated in the Machiwara Town of Ludhiana Distt. This holy land of Machiwara Sahib was once traversed by Guru Gobind Singh who came here from Gulabe & Punjabe's house. Gani Khan and his brother Nabi Khan were well aware of the danger that Guru Gobind Singh was in, yet even though they were Muslims their respect for the Sikh Guru was such that they risked certain death, if caught, and travelled to meet with him asking him to come to the safety of their home.

Along their way they noticed that there were way too many informers roaming around so they suggested that the Guru should have his clothes colored blue, as it would be easier and far safer for them to travel. And so a dyer was called for. When the dyer arrived Guru ji requested that he re-color his clothing blue - a color then associated with Sufi Sants.

Dyer needs 3 days for the dye to mature

The dyer then told the Guru that he could do as he wished, but he added that the clothes could only be dyed when a matti (a large earthen pot) was fully prepared and that would takes 3 days once the dye was put in. The Guru told the tradesman that he had already had a matti prepared, when the dyer went in the next room and saw it, he was amazed to see the matti already boiling with the proper dye in the water.

The dyer, now sure, that the Guru was a true 'Hermit of God', realized that he should ask for some boon from him. After coloring the clothes and presenting them at the Guru's feet, the dyer stood with his hands pressed together. Guru Ji gave the man some coins, but the dyer refused to take money. Guru Ji asked him then what did he want? The dyer asked his blessing so that he might have a child. Then added a second request saying, "as I am unable to earn enough for a living and am not able to pay off the debt I owe for the dye I use, kindly bless me.

The Guru grants the wishes of the dyer

Guru Gobind Singh replied saying, "the matti in which you have colored my clothes will never again require that any coloring be added to it. Just dip in your cloth and whatever color you think in your heart, the cloth will become that color.

Keep the matti covered and do not tell this secret to anyone. The place where the dyer request was granted and where he was made so happy and went away excited, Gurdwara Chaubara sahib exists on at that location. It is around 500 yards from the Gurdwara Ghani Khan Nabi Khan. You can to this day visit Gurdwara Chaubara sahib and see the Matti sahib.

Request by Gani And Nabi Khan

Gani Khan Nabi Khan requested that even they do not have any child to which the Guru said that your service has already been accepted and whatever blessings were given are listed in the Guru Hukamnama. The Guru stayed at this place for 2 days and 2 nights. From this place, the Guru along with Gani Khan, Nabi Khan, Bhai Daya Singh Ji, Bhai Dharam Singh Ji, Bhai Maan Singh Ji went to Gurdwara Kirpan Bhet Sahib in a Palki, which is about 2 kms away from this place, going through Gurdwara Katana sahib via village Rampura Kanech went towards Alamgir.

Note: Guru Gobind Singh, while accepting the service of Gani Khan and Nabi Khan, gave this Hukamnama to him at Gurdwara Alamgir sahib. The photocopy of the same has been kept at Gurdwara Ghani Khan Nabi Khan.