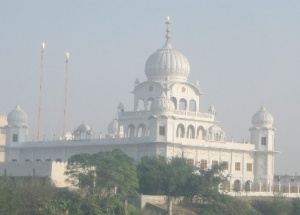 Gurdwara Degsar Sahib, popularly known as Gurdwara Katana Sahib, is situated along the Sirhind Canal near Grand Trunk Road in Katana village of Ludhiana District. This beautiful and well planned Gurdwara, in the center of a lovely garden, is situated on the Doraha Nillon Link Road, by the Side of the Sirhand Canal. Gurdwara Degsar Sahib is 25 km from Ludhiana and 5 km from Doraha, which has a railway station.

Shri Guru Har Gobind visited this site on 20th Phagun 1675. GURU JI had 7 cannons, 1100 horse riders & Chandu Qaidi ( the one who was involved in Guru Arjun Dev's martyrdom) , one gown with 52 flower buds with which he freed 52 prisoners from Gwalior fort. He rested here for a night and tied his horse to a "Ber" tree. This place is known as Damdama Sahib.

Guru Gobind Singh Ji also visited the place while on his way to Dunanagar in 1705 from Machiwara. Disguised as the "Uchh Da Pir", He was accompanied by Bhai Daya Singh, Bhai Dharam Singh, Bhai Maan Singh and the two Muslim brothers Bhai Nabi Khan and Bhai Gani Khan who were serving as his palki bearers. His bed was placed under the "Ber Sahib" where he rested for the night. It is believed that Guruji had his first meal since leaving Machiwara and that he distributed the "Deg" with his holy hands & named this place as "Degsar Sahib". So whoever offers Deg with a promise, his desire is fulfilled by Guru Sahib.

During colonial rule the British had planned to relocate the Gurdwara 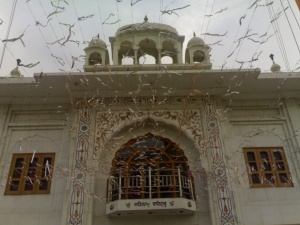 In the year 1854, a survey was conducted regarding Sirhind river and the British proposed to dig an irrigation canal that would require the Gurdwaras relocation, but Mr. Smith, the engineer in charge of the digging work, suddenly was blinded as he attempted to cut down the "Beri Sahib" under which Guru Sahib had slept. Blood came out wherever the ax struck the "Beri Sahib". The foreign engineer regretted & offered DEG of Rs 51 and he began to see again. Then this place was not touched at all & the river was made to bend & pass.

The river going close to GURUDWARA SAHIB is a proof to history & the "Beri Sahib" still exists. A small Gurdwara constructed by Mr. Smith is close by & can be seen standing on a hillock. He wanted to destroy this gurdwara & construct a gurdwara on it but this big gurdwara still stands firm with its glory & there is a big "Jor Mela" on every Sangraand.