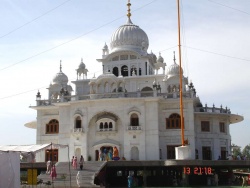 Gurudwara Brahm Bunga Sahib, Dodra, District, Mansa (Punjab) is the centre established for Sikh meditation and kirtand and for samagams. This new Gurdwara named Brahm Bunga Sahib,Doraha is situated near the town Doraha located in district Ludhiana (Punjab) and is a branch of the organisation called "Gurudwara Brahm Bunga Sahib,Dodra". The new Gurudwara sahib is located on Dakhni Bypass, Canal road and at distance of 4KM from Doraha and 20 Km from Ludhiana.An annual Samagam is held every year in the month of June for 8 days. In addition to various Sikhi Samagams taking place at this shrine, Samagams are also being held with great love and devotion in various other parts of the world.

In the beginning for some years, samagams were held in the houses of a few retired personnel of the Burmese Army residing in Dodra village. Impressed by these Samagams, retired Subedar Kishan Singh, donated a plot of land for the Sangat in 1971 where Satsang samagams were held for 2 years in a temporary structure. Gradually several rooms came up in the Gurdwara complex.

In view of increasing sangat, Bauji with his foresightedness formed and got registered a governing body named Brahm Bunga Trust (Regd.) and the entire management was entrusted to the trust.

Due to the large number of sangat coming from numerous cities and villages of Punjab and other states of India, Gurdwara buildings were enlarged and extended as required. Now a new huge diwan hall has also been constructed. There is an adequate arrangement for the boarding and lodging of the sangat during the period of samagam.