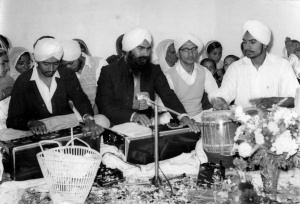 Gurbani Kirtan or Shabad Kirtan simply Kirtan refers to Sikh devotional music that originated in the Hindu tradition as loving songs sung to God. Kirtan is also one of the important aspects of Sikhism that refers to the singing of the Sacred Hymns from the Guru Granth Sahib accompanied by music. The Sikhs place huge value on this type of singing and a Sikh is expected to listen to and/or sing Guru-Kirtan as frequently as possible.

Traditionally the music used to accompany Kirtan has been Indian Classical Music, which is based on Ragas and taal (rhythmic beat patterns). Traditionally the Indian musical instruments the Harmonium and Tabla have been used for this type of music. The Sikh scripture contains 31 Ragas and 17 talas which form the basis for Kirtan musical compositions.

While most Hindus and Sikhs devoutly sing Kirtan in its more traditional form, there are smaller groups that experiment with incorporation of non-Indian instruments such as the guitar. Some have even interspersed Western themes like jazz into the mix.

The Guru has pronounced that Kirtan is the magical formula to keep the human soul afloat in the dark era of Kaljug provided the devotee sings the pure melodies with his or her heart closely focused on the meaning and true spirit of the Gurbani thus:

Of inestimable significance is the composition of Sri Guru Granth Sahib (“SGGS”) in Divine Poetry. Lovers of God invariably choose to express and communicate their mystic experiences in this language of love, language of spirit. Musicality adopted in the composition is also unique. It awakens deeper layers of human heart and consciousness. It encompasses what is otherwise indescribable and incommunicable. Divine wisdom is laced with sweet melodious fragrance. This divine melody tunes the soul with Rhythm Eternal.

It is all composed in mystic poetry. It was cast into 31 musical measures (Ragas). It is a natural flow of the divine ecstasy of Lovers of God. Language used being the spoken language of the people is simple and easily understandable. Music is the medium of expression of deep spirituality. It is natural outcome and flow of religion of love. It transports others also to the realm of divinity. He thus passed on an inexhaustible treasure of Celestial Music and an inexhaustible divine source of Holy Kirtan for posterity. He preaches the whole range of spirituality with his lyrical power, singing the Glory of the Lord to the accompaniment of a Tambura (a musical instrument) with the touch of His Holy Hands.

His Grace flows in torrents through these hymns and fills the hearts with intense devotion, stimulates humility and stirs Amrit Nam latent in the soul.

The influence of Holy Kirtan is deep, profound and divine. Kirtan transports one to the Abode of the Lord. It lifts one out of time and space. It blesses one with a true glimpse of divinity.

In this Dark Age (Kaliyuga) fruition of life lies in singing the praises and glory of the Lord (Holy Kirtan).

Holy Kirtan acts as a powerful arrow piercing through the heart. This is the way the Guru injects love and purity through His powerful Bani.

The Holy Sikh Scripture, Sri Guru Granth Sahib (“SGGS”) is the main spiritual authority for the Sikhs. The Sikhs hold unique high regards for their Granth (“scripture”), which is treated as a living Guru (“religious master”). When Kirtan is sung, the lyrics are normally lines from the SGGS.

The Shabads (“Hymns”) of the Sikh Scriptures are primarily arranged in Chapters, which are names of musical Ragas (“ musical theme”). So the main Sikh Holy Scripture is arranged in chapters that bear names of musical ragas. Each of these Ragas is unique and all the Shabads in that Chapter have to be sung in that particular Raga. The title of the Shabad also has a numeric notation, which many believe gives the singers a clear idea of the Tala or musical rhythm or beat that needs to be used for that hymn.

Below is the English Translation from page 14 of the SGGS:

Real Kirtan is performed through words, mind and actions.

The Sikh tradition of Kirtan-Gurmat Sangeet-started by Guru Nanak at Kartarpur in 1521 was strengthened by his successors and particularly by Guru Arjan at Amritsar. In spite of several interruptions, kirtan continued to be performed at the Golden Temple and other historical Gurdwaras with due attention to raga, taal and dhuni.

There are three types of Sikh musicians, all of which continued to flourish during the period of the Gurus:

Guru Nanak started the rababi tradition by engaging Bhai Mardana as his accompanist-musician. Formerly the Muslim singers were known as Mirasis, but Guru Nanak gave them a new name - rababis, because they played on the rabab (rebec) and adopted the Sikh way of life in food, dress and manners. Some of the notable rababis after Mardana were his son Shahjada. Balwand and Satta, Babak - son of Satta, Chatra - the son of Babak, and Saddu and Baddu - the rababis used to perform kirtan regularly at Amritsar before India was Partitioned in 1947. The last of the line of rababis was Bhai Chand whose kirtan the author had the privilege of listening to, before 1947. After the Partition of India, the rababis migrated to Pakistan, the line of rababis is almost dying out without Sikh patronage.

The second type of musicians, ragis, were the amateur singers whom Guru Arjan encouraged to perform kirtan in order to avoid dependence on professional rababis. Some of the bards (bhatts) at the Court of Guru Arjan, whose compositions are included in the Scripture, became ragis and did kirtan before the congregations at different centres. Early in the eighteenth century, Bhai Jassa Singh Ahluwalia - the great warrior-performed kirtan at Mata Sundri’s residence at Delhi, after the passing away of Guru Gobind Singh.

The ragi group generally consists of three persons: one plays the tabla or jori (pair of drums) seldom participating in the singing; the other plays the harmonium, and the third plays a stringed instrument or harmonium or cymbals. The leader of the group sits in the centre and the group is known by his or her name. Even today, ragi-groups are employed by the Shromani Gurdwara Parbandhak Committee to perform kirtan in relays at the Golden Temple and at some historic Gurdwaras in the Punjab. Some of the travelling ragi-parties continue to perform kirtan in different parts of the world where there is a concentration of Sikh residents. Some groups of American Sikhs are particularly devoted to kirtan and sing hymns every morning in their Ashrams or in the local Gurdwara on holidays.

Guru Hargobind first employed the third types of musicians called dhadhis early in the seventeenth century. He instructed them to sing heroic ballads (vaars) in his court to inspire the Sikhs to acts of valour and heroism. Bhai Abdulla - expert in playing the Sarangi, and Bhai Natha - player of dhadh (a small hand-drum) were quite popular. As the clash with tyrannical Muslim rulers appeared imminent the dhadhi-groups performed before the sangat and groups of Sikh soldiers. These groups subsequently became very popular all over the Punjab on account of the use of folk tunes and their zealous and emotional style of singing. These folk singers had hardly any knowledge of Hindustani classical music, but their appeal to the masses was irresistible. A dhadhi group consists of two or three singers, one playing on the sarangi, another playing on the dhadh, and the third may be their leader, discoursing on the contents of their songs. Though they are expected to sing vaars of the Scripture, they usually sing their own poetic compositions on the daring exploits of Sikh warriors and martyrs. One of the famous dhadhi-jathas was that of Bhai Kishen Singh Kartor. Sohan Singh Seetal is also a well-known dhadhi.

The tradition of kirtan developed over the period of the ten Gurus is as follows:

Ragas have a direct relationship to human moods and the following are the connections between Ragas and feeling:

In connection with Tala or musical beats/rhythms and the ‘Ghar’ in the SGGS, the following can be concluded.

The Sikh Gurus gave huge importance to Kirtan and this can be concluded from the following Shabads.

On 107 to 108 Guruji says that illnesses of countless lives are eroded by singing Kirtan, thus:

On page 178, Guruji says that mind becomes peaceful when Kirtan is sang -

On Page 196, Guruji says, Kirtan can only be sung by good fortune, thus:

On Page 199, the SGGS advices that Kirtan keeps the mind awake and alert:

On page 208, Guruji tells us those whose hearts are alight with God, sing Kirtan:

Also on the same page, Guruji says that ‘Kirtan is my treasure’:

On page 214 Guruji tell us that by singing Kirtan we will be saved, thus:

On page 297, Guruji tells us that even death is overcome by singing Kirtan:

'On page 322, Guruji says ‘lives of those who sing Kirtan are approved’, thus:

Guruji on page 363 tell us by singing Kirtan, Naam (God’s remembrance) is instilled in the mind thus:

Guruji on page 454 tell us that all sins and sorrows depart when Kirtan is sang:

On Page 642, Guruji tells us that singing Kirtan is the ‘highest of all actions’ that we can perform:

Guruji on Page 683 tell us clearly that ‘All desires, power, pleasure, joy and lasting bliss’ are found by singing Kirtan:

On page 1300, Guruji say by singing Kirtan, all Evil-mindedness is removed:

On Page 1337, Guruji advises us that singing Kirtan is equal to bathing at 68 sacred holy places, thus:

On page 1356, Guruji tell us how by singing Kirtan, the entire world and Pride, Attachment, Greed, Anger and Lust (PAGAL, the five thieves) are conquered, thus: