Chamkaur Sahib (30° 53'N, 76° 25'E) in Ropar district of the Punjab was the scene of two engagements, battles, which took place here between Guru Gobind Singh and the imperial troops in the opening years of the eighteenth century.

According to Guru shabaci Ratnakar Mahan Kosh, Guru Gobind Singh had been here once before when he was on his way to Kurukshetra in 1702. On his return trip from Kurukshetra to Anandpur early in 1703 the first of the two battles, mentioned above, took place near here at the location where Gurudwara Ranjit Garh Sahib now stands, details below.

This Gurwara marks the Spot where Guru Gobind Singh first alighted upon reaching Chamkaur late on 6 December 1705. The site was then a garden belonging to Rai Jagat Singh, the local landlord. The Guru sent some of his disciples to request Rai Jagat Singh to let him take shelter in his haveli. Jagat Singh, for fear of the rulers wrath, refused, but his younger brother, Rup Chand, asserting his right as a co-owner of the house, allowed Guru Gobind Singh to enter.

However, there are other chronicles which list the names of the owners of the property as Budhi Chand and Gharibu.

A small gurdwara was first constructed here around 1930 by Sardar Bahadur Dharam Singh (1881-1933), a well known philanthropist of Delhi. The present building was raised in 1963 by Sant Piara Singh of Jhar Sahib. It duplicates the design of the central building of the older Gurdwara Qatalgarh Sahib a square sanctum on the ground floor within a square hall, and a domed room above the sanctum with decorative cupolas at the corners. The Gurdwara is managed by the Shiromani Gurdwara Parbandhak Committee through a local committee, with offices located at Gurdwara Qatalgarh Sahib.

This Gurdwara marks the site of the fortress like double storeyed house, with a high compound wall around it and only one entrance from the north, which was used by Guru Gobind Singh as a temporary citadel in the unequal battle on 7 December 1705.

History of the Battle of Chamkaur, the Second Historic Battle at Chamkaur

On occupying the house during the night of 6/7 December, he had assigned 8 Sikhs each to guard each side of the four sided perimeter wall, while another two, Madan Singh and Kotha Singh, were posted at the only entrance which faced north. Guru Gobind Singh, with his sons Ajit Singh and Jujhar Singh and other disciples, took up positions on the first floor of the house in the centre.

The imperial army, grown larger with reinforcements from Ropar, Sirhind and Malerkotia, arrived and surrounded the garhi. The battle raged throughout the day. Successive efforts of the besiegers to storm the citadel were thwarted. As the ammunition and arrows in the fortress ran out, the Sikhs started coming out in small batches to engage the enemy in hand to hand fight.

The Sahibzadas lead two such successive sallies, Ajit Singh and Jujhar Singh, 18 and 14 years old respectively, who like the other Sikhs fell fighting heroically. The valour displayed by the young sons of Guru Gobind Singh has been poignantly narrated by a modern Muslim poet Allahyar Khan Jogi who used to recite his Urdu poem entitled, "ShahidaniWafa" from Sikh pulpits during the second and third decades of the twentieth century.

By nightfall Guru Gobind Singh was left with only five Sikhs in the fortress. These five urged him to escape so that he could rally his followers again and continue the struggle against oppression. The Guru agreed. He gave his own attire to Sangat Singh who resembled him somewhat in features and physical stature, and, under cover of darkness, made good his way through the encircling host slackened by the fatigue of the day's battle. Daya Singh, Dharam Singh and Man Singh also escaped leaving behind only two Sikhs, Sangat Singh and Sant Singh. Next morning as the attack was resumed, the imperial troops entered the garhi without much resistance, and were surprised to find only two occupants who, determined to die rather than give in, gave battle till the last.

Upon the fall of Sirhind to the Khalsa in 1764 when this part of the country came under Sikh domination, the fortress at Chamkaur came to be preserved as a sacred monument. Maharaja Karam Singh of Patiala had a gurdwara constructed here. It was called Garhi Sahib ; also, Tilak Asthan (Anointment Site) in the belief that Guru Gobind Singh's act of obeying the five Sikhs with regard to his escape and giving his dress, turban and plume to Bhai Sangat Singh were symbolic of anointing the Khalsa as his successor to guruship. The old Gurdwara building has since been demolished and replaced by a four storeyed structure. The sanctum is on the ground floor in the centre of a large divan hall. The building is topped by a lotus dome covered with chips of glazed tiles. There are decorative domed pavilions over the corners and walls of the main hall.

This Gurdwara west of Garhi Sahib, is the main shrine at Chamkaur Sahib.

This marks the site where the thickest hand to hand fight took place on 7 December 1705 between the Mughal army and the Sikhs, including the Sahibzadas, Ajit Singh and Jujhar Singh, and three of the original five Piare (the Five Beloved).

A gurdwara was constructed here by Sardar Hardial Singh of Bela in 1831 but that building was replaced during the 1960's by a new complex raised under the supervision of Sant Piara Singh of Jhar Sahib and later of Sant Bishan Singh of Amritsar. The main building of Gurdwara Katalgarh Sahib is called Manji Sahib. It is an elegant three storeyed domed structure standing upon a high base. The large divan hall contains an eight metre square sanctum. Another vast hall close by is called Akal Bunga. It was used for the daily congregations before Manji Sahib was constructed. To the west of Akal Bunga is an old Baoli Sahib still in use. The Guru ka Langar, community kitchen, is further north from Baoli Sahib and Akal Bunga. The Gurdwara also houses the offices of the local managing committee which administers all historical shrines at Chamkaur under the overall control of the Shiromani Gurdwara Parbandhak Committee.

In addition to the daily services, largely attended assemblies take place on the first of each Bikrami month and on important anniversaries on Sikh calendar. A three day fair called Shahidi Jor Mela is held on 6,7 and 8 Poh, usually corresponding with 20, 21 and 22 December, commemorating the martyrs of Chamkaur.

Is located on the eastern out-skirts of the town. As Guru Gobind Singh was returning from Kurukshetra to Anandpur early in 1703, it so happened that two imperial generals, Sayyid Beg and Alif Khan, were also moving with a body of troops towards Lahore. Raja Ajmer Chand of Kahlur, who bore hostility towards him, persuaded these generals by promises of money to attack him.

A skirmish occurred on the site of the present Gurdwara Ranjitgarh. The Sikhs, though surprised by a superior force, fought tenaciously. Sayyid Beg, when he came face to face with the Guru, was so affected by a sight of him that he immediately changed sides. Alif Khan, chagrined by his colleague's behaviour, attacked with redoubled vigour, but was repulsed. This happened on 16 Magh 1759 Bk/15 January 1703. Gurdwara Ranjitgarh was built only recently to mark the scene of this battle.

Is Located next to Gurdwara Garhi Sahib and represents the site of the gate of the fortress used by Guru Gobind Singh as the bulwark of his defence in the unequal battle of 7 December 1705. The gate was guarded by Bhai Madan Singh and Bhai Kotha Singh, although the Gurdwara came to be named after Bhai Jivan Singh.

Jivan Singh was the same Bhai Jaita who had brought Guru Tegh Bahadur's head after his execution from Delhi to Kiratpur in 1675, and earned from Guru Gobind Singh the endearing title of 'Ranghrete Guru ke Bete'. Upon his initiation into the order of the Khalsa in 1699, he had received the name of Jivan Singh. According to the Bhatt Vahis, he was killed in a rearguard action on the bank of the Sarsa.

Gurdwara Shahid Burj, which commemorates his martyrdom, is a small shrine of old Sirhindi bricks to which a small hall has been added lately. The original shrine in which the Guru Granth Sahib is seated was built by Majhabi Sikhs, the community to which Bhai Jivan Singh originally belonged.

This Gurdwara is situated on a low mound to the west of Gurdwara Qatalgarh. 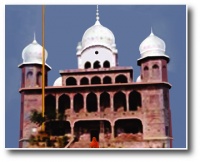 Taari Sahib, being Reconstructed
.
When Guru Gobind Singh decided to leave the Garhi at Chamkaur during the night of 7-8 December 1705, three Sikhs, Bhai Daya Singh, Bhai Dharam Singh and Bhai Man Singh, came out with him, too.

They proceeded each in a different direction, agreeing to meet later at a common spot guided by the position of certain stars. Since he did not wish to leave unannounced, Guru Gobind Singh, upon reaching the mound where now stands Gurdwara Tarhi Sahib (tarhi lit. means a clap), clapped and shouted: "Here goes the Pir of Hind (the saint of India)! "From their different locations the three Sikhs each raised shouts.

This baffled the besiegers, and Guru Gobind Singh and the Sikhs were soon gone out of harm's way. The Gurdwara on the mound marks the site from where Guru Gobind Singh had proclaimed his departure by his hand clapping.