From SikhiWiki
(Redirected from Ludhiana District)
Jump to navigationJump to search 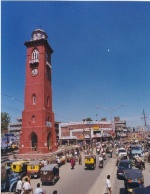 Ludhiana ( Punjabi: ਲ੝ਧਿਆਣਾ) (30°54'N, 75°52'E), is a city and a municipal corporation in Ludhiana district in the state of Punjab, in northern India. It is the largest city in Punjab, with an estimated population of 15 lacs (15,00,000 or 1.5 million). The population increases substantially during the crop harvesting season due to immigration of laborers from such states as Uttar Pradesh, Bihar and Delhi. Standing on the Sutlej River's old bank some 13 km south of the river's present course, the city which covers an area of about 310 km², has become a major industrial center of northern India.

Ludhiana is centrally located on the National Highway 1 between Delhi and Amritsar. It is connected to the Indian capital city of New Delhi by road and frequent train service. It is the richest district in the state of Punjab, and also includes the most productive, fertile land in all of India. Ludhiana district is considered to be one of the NRI hubs of Punjab.

Ludhiana is home to an important Sikh historical shrine called, Gurdwara Gau Ghat Patshahi I that is situated on the bank of the stream Buddha Nala. According to local tradition, Guru Nanak visited the site in the course of his travels during the early sixteenth century. The local chief, Nawab Jalal uddin Lodhi, living in the fort near the Guru's camp, came to pay obeisance and besought the Guru to save the town from erosion by the River Sutlej.

Guru Nanak told him to be sympathetic and be just towards his subjects and to leave the rest to God. Only a platform called Thara Sahib existed here to commemorate the Guru's visit until a proper building was constructed in 1972/73. The present building is a small rectangular hall in front of a flatroofed sanctum where two volumes of the Guru Granth Sahib are placed side by side. A sarovar has since been added to the complex by diverting part of the Buddha Nala and reclaiming part of the nalas former bed.

The Gurdwara is affiliated to the Shiromani Gurdwara Parbandhak Committee and is managed by a local committee.