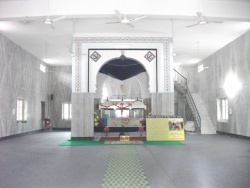 Gurdwara Kirpan Bhet sahib is situated in the Machiwara Town of Ludhiana District. This holy land of Machiwara Sahib was once traversed by Guru Gobind Singh in about 1705 when he was travelling from Anandpur sahib to Talwandi Sabo on a journey that is referred to as Guru Gobind Singh marg.

It was here that the tradition of dipping the kirpan upon doing the ardas was started by the tenth Guru, Guru Gobind Singh. Under the difficult situation while under the concerted efforts of the Mughals to hunt down the Guru by any means, it became impossible for the Sikhs to have the luxury of preparing langar in the traditional manner where much time could be spent and the Guru could bless the food first in the tradition way of consuming the meal before the rest of the congregation.

Hence, to make the process quicker and easier, before the meal was consumed, the ardas was done in the normal way to thank the Almighty. Towards the end of the ardas, the kirpan was dipped into the food as a symbol of offering to the Lord before the whole of the congregation consumed the meal.

This tradition was first instigated at this location where the Gurdwara now stands.