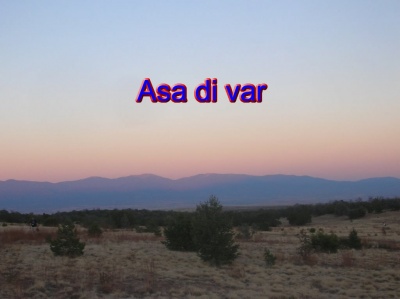 Photo thanks to Prabhu Singh

The above menu allows you to select each section of this morning Sikh holy Bani which is normally sang in the form of kirtan. You can read this Gurbani in Gurmukhi or English text with English translation. Also by clicking on Play Audio at the top of the screen, you can listen to the Gurbani in Gurmukhi/Punjabi.

The Bani has been divided into 13 sections which almost correspond to each page of Guru Granth Sahib. Please choose from one of the 13 options that are available at the top of the screen.

The term "Asa di Var" comprises three words: The third word var means an ode or a lyrical verse; the word Asa which means "hope" in Punjabi) is also a Raag or musical measure used in the Guru Granth Sahib; and "ki" or "di" mean "of". Thus together the terms means "A ballad of hope". Raag Asa is the raga of pre-dawn hours and the custom of reciting the hymn at morning time is traced to the days of Guru Nanak himself.

ASA KI VAR, is the term recorded in the index to the Guru Granth Sahib but this Gurbani is commonly called "Asa di Var". It is found in the Sikh scripture from page 462 line 17 to page 475 line 10 spaning about 13 pages. It is a composition by Guru Nanak, the founder of Sikhi and is sung by kirtania (religious musicians) at Sikh congregations or gatherings as part of the early morning service.

The Var is an heroic ode which describes the brave deeds of a hero. It is generally sung to inspire armies going to battle or to inspire people with martial spirit. The tempo of this bani when sung is very measured and positive inspring a spirit of chardikala in the congregation.