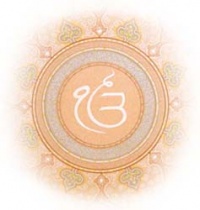 Sikhism, the youngest of the world's religions, is barely five hundred years old. Its founder, Guru Nanak, was born in 1469. Guru Nanak spread a simple message of "Ek Onkar": we are all one, created by the One Creator of all Creation. This was at a time when India was being torn apart by castism, sectarianism, religious factions and fanaticism. He aligned with no religion, and respected all religions. He expressed the reality that there is only one God with many paths that lead to Him, and that the Name of God is Truth, "SatNam".

Guru Nanak's followers were Sikhs (seekers of truth). He taught them to bow only before God, and to link themselves to the Guru, the Light of Truth, who lives always in direct consciousness of God, experiencing no separation. Through words and example, the Guru demonstrates to followers how to experience God within themselves, bringing them from darkness into light. Guru Nanak was a humble bearer of this Light of Truth. He opposed superstition, injustice, and hypocrisy and inspired seekers by singing divine songs which touched the hearts of even the most callous of listeners. These songs were recorded, and formed the beginnings of the Sikhs' sacred writings, later to become the "Siri Guru Granth Sahib".

Nam Japna - To get up each day before sunrise, to clean the body, meditate on God's Name and recite the Guru's hymns to clean the mind and throughout the day to continuously remember God's Name with every breath.

Dharam di Kirat Karni - To work and earn by the sweat of the brow, to live a family way of life, and practice truthfulness and honesty in all dealings.

Vand Ke Chakna - To share the fruits of one's labor with others before considering oneself. Thus, to live as an inspiration and a support to the entire community.

The Ten Gurus of the Sikhs

The foundation of Sikhism was laid down by Guru Nanak Dev Ji. Guru Nanak Dev Ji rather than simply passing the Guruship of his teachings onto his own sons (as was the custom at the time) looked for someone to show up who revealed himself as the most deserving of the Guruship. Choosing his replacement he laid his hand upon him and announced him 'Angad' (part of his own body). Subsequently the light of Guruship was passed in the same manner, always to the person who showed himself to each new 'Nanak' as his replacement. The word "Guru" is derived from the root words "Gu", which means darkness or ignorance, and "Ru", which means light or knowledge. Thus, a "Guru" is one who takes a person from darkness of ignorance to the light of knowledge. The "Guru" guides us to experience the Truth (of God).

Each one of the ten Gurus represents a divine attribute:


Guru Gobind Singh Ji, the Tenth Guru, exemplified the Sikh ideal of the 'Sant-Sipahi', which directly translates as Soldier-Saint. He was also an inspired and prolific writer, courageous warrior, and a source of Divine Wisdom to his Sikhs. "When all other means have failed," he said, "only then is it righteous to take up the sword." He was the defender of the poor, the meek, and the oppressed masses of India.

The Holy Scripture is placed on the dominant platform (a throne with beautiful and colourful fabric) in the main hall of the gurdwara during the day. The respect held for the Holy Granth is illustrated best at the Harmandir Sahib or as it is better known around the world the Golden Temple. Early each morning with the sound of a regal trumpet announcing the coming of The Holy Granth which is lovingly carried in a Silver and gold Palki from its place of rest at night in the Akal Takhat to the Harmandir Sahib itself to the Darbar Sahib (The Court of the Lord). Along the way a Sikh volunteer waves a Chaur Sahib over the Granth in the same manner accorded the living human Gurus. Inside the Sanctum the Guru Granth Sahib's Manji (throne) is placed so that the Granth is seated higher than any other seat in the Darbar. The process is repeated each evening in reverse. The Chaur Seva is just one of those core traditions that the Sikhs practise to honour their Guru with the high regard and respect that Gurbani deserves.

A striking video of the Granth's procession to its place of rest in the Akal Takht can be viewed on Youtube - here. If you haven't been to a Gurdwara, let alone the Harmandir Sahib, this short video will let you see firsthand the reverence recorded the Shri Guru Granth Sahib.

The Sikhs do not 'worship' the SGGS for that is forbidden – Only the One Almighty God is to be worshipped, for He is the Creator of everything that can be perceived and also those things that cannot be perceived.

During the time of the first ten Gurus, the congregation (Sangat) and Sevadar (volunteers) who came from afar to see the Gurus, wanted to be close to the Gurus and listen to their advice and guidance (Shabad). So they would sit near Guru ji and listen to the words of wisdom from the Guru and do Chaur Seva for the Guru. This seva was done turn by turn by many members of the congregation (Sangat) to be as close to their Guru as possible.

The Making of the Khalsa

Guru Gobind Singh was the last Guru of the Sikhs in human form. He created the Khalsa, a spiritual brotherhood and sisterhood devoted to purity of thought and action. He gave the Khalsa a distinctive external form to remind them of their commitment, and to help them maintain an elevated state of consciousness. Every Sikh baptized as Khalsa vows to wear the Five "K's":

Khalsa also vows to refrain from any sexual relationships outside of marriage, and to refrain from taking tobacco, alcohol, bhang and all other intoxicants (see Rehat Maryada). Furthermore, some Khalsa are against the consumption of any food containing meat or eggs (see Vegetarianism and Vegetarianism Other Views).

The Sikh Religious Philosophy can be divided into 5 Sections:

For more on this section select Sikhism Primary Beliefs and Principles.

For more information on this section select Sikhism Underlying Values.

The Punjabi language does not have a gender for God. Unfortunately, when translating, the proper meaning cannot be correctly conveyed without using Him/His/He/Brotherhood, S/He etc., but this distorts the meaning by giving the impression that God is masculine, which is not the message in the original script. The reader must correct for this every time these words are used.