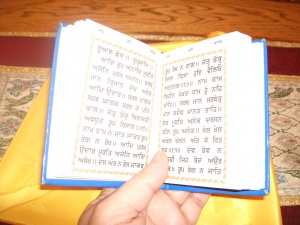 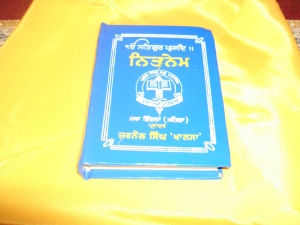 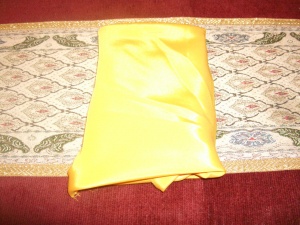 Gutka, a small sized missal or breviary containing chosen hymns or Banis from Sikh Scriptures. The etymology of the term gutka may be traced back to Sanskrit ‘gud’ (to guard, preserve) or ‘gunth’ (to enclose, envelop, surround, cover) through ‘Pali gutii’ (keeping, guarding). A late eighteenth century scholar of the Udasi sect spelt the word as gudhad. It is obligatory for Sikhs to recite certain texts and prayers as part of their daily devotions. This led to the practice of writing them down in gutkas or pothis (larger in size than gutkas).

The keeping or carrying of gutkas must have gained greater vogue among the Sikhs during the early eighteenth century when disturbed conditions forced them to be ever on the move. They kept them sheathed with their gdtrds or crossbelts as they rode from place to place. Gutkas became really popular with the advent of the printing press and the rise of the Singh Sabha movement during the last quarter of the nineteenth century when various types of gutkas made their appearance.

The most common were Nitnem gutkas, which contained Banis meant to be recited daily, namely Japji, Jaap, Sawayya, Anand for the morning, Sodar Rehras and Benti Chaupai for the evening and Sohila at bedtime. Some also contained Shabad Hazare, Asa ki Var and Sukhmani, although the last two banis were also available in separate volumes.

Another gutka which has gained currency under the title is Sundar Gutka containing besides all the above banis, compositions for occasional recitation such as Barah Maha (Twelve Months) and hymns appropriate to birth, marriage and funeral ceremonies and rites. The commonest script is Gurmukhi, although gutkas published in English, Devanagari and Persian scripts are also available.