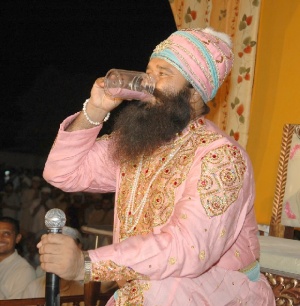 Gurmeet Ram Rahim Singh, also spelled Ram Raheem Singh, is the current leader of an organization called Dera Sacha Sauda. Since becoming the head of this sect, he has often been involved in controversy, even having criminal cases filed against him. Recent clashes between the members of his sect and Sikhs have escalated (at least two Sikhs have been killed during protests against the Dera) since the day Ram Rahim, in an effort to create a new ceremonial initiation for his followers; to brighten, accelerate and sharpen their potential as members of the Dera, (at least in their minds) used many items similar to those used by Guru Gobind Singh when he introduced Khande di Pahul or Amrit Sanskar at Baisakhi in Anandpur (1699).

Not only did he mix a large kettle full of a sweetened drink very remanescent of Amrit with which to initiate his followers, he also dressed that day, in clothing which seemed right out of the many paintings depicting how Guru Guru Gobind Singh was dressed that day. His actions that day seemed, to many Sikhs, as if they were right out of the pages of Sikh history.

Clashes with the Sikh community

In May 2007 Dera Sacha Sauda was accused of insulting Sikhism after the organization's leader, Gurmeet Singh, "appeared in an advert in which Sikhs said he was made to look like the last Sikh Guru, Gobind Singh."[1] This controversy developed into a serious law-and-order problem in various parts of Northern India, as riots broke out between Sacha Sauda followers and the SGPC. At least one person was killed, and over a hundred injured in the ensuing six days of sectarian violence."[2]

On 20 May, 2007, a press release by the organization mentioned that it regretted the events that had occurred. The sect admitted that the ad did create misunderstandings, but that it was never intended to hurt the sentiments of the Sikh community[3] The organization again apologised on 27 May, 2007 saying, "We are pained by the developments of the last several days. We are sorry for the misunderstanding and would like to apologise to Guru Gobind Singh."[4]. However the Akal Takht rejected the apology, saying it was dissatisfied with the manner in which the Dera head has sent the apology.[5].

On 20 June 2007, Additional Chief Judicial Magistrate A.L. Kitchi issued an arrest warrant against Gurmit Ram Rahim Singh in connection with a criminal case registered against him under Section 295-A of the IPC on May 20 in Bathinda.[6].

The most damaging allegation as yet on Baba Ram Rahim is of a female follower's letter anonymously sent to Prime Minister, President, Chief Minister of Punjab (India) and Haryana and to session judge of Punjab (India) and Haryana High Court and Supreme Court and a DGP of Police in 2002. It claimed that Baba Ram Rahim had allegedly raped her and at least 50 more female followers in the Dera Sacha Sauda premises. - After the publication of this letter in a newspaper the editor of the News Paper "Pura Sach", Ram Chandra Chatrapati was murdered. - The case was then handed over to CBI to investigate further. - And after the CBI there was another murder of a Dera Follower Ranjit Singh. His father also complained in the courts that Baba Ram Raheem was directly involved in the murder. So the CBI included the murder of Ranjit Singh into its ongoing investigations. - The case then moved on in a snail pace; only after the dera and sikh community clash did the high court order the CBI to submit its report on 31 July 2007 by all means. -This report has been submitted and CBI has framed Babba Ram Raheem and has not given him clean chit , it means CBI has found him guilty. The CBI will release its details on 1st August and will produce all the evidence collected to the court on 31 August.

In October 2007, Baba Ram Raheem got an interim bail in murder, rape cases by a Special Central Bureau of Investigation (CBI) court.

Allegations made by Khatta Singh on Indian T.V.

On 27th, a sting operation by Tehelka and Indian TV recorded a statement from hidden camera, of the main witness Khatta Singh (Gurmeet Ram Rahim's driver) for CBI in the case against Ram Rahim. You can watch that video here. Video of khatta singh diver of baba ram raheem confirming allegations on baba ram raheem on Indian TV

The organization and its head, Gurmeet Ram Raheem Singh, are also under investigation for the murder of a journalist, Ram Chandra Chatrapati, and for sexual exploitation of women followers.[7]

Although Dera Sacha Sauda says it discourages donations, Gurmeet Ram Raheem Singh's favourite mode of transport is a fleet of Mercedes cars, protected by up to 25 bodyguards.[8] In 2007, he clashed with the Punjab's state government after urging his followers to vote for the Congress party, which forms the opposition in Punjab.[8]

The organization supported the Indian National Congress against the ruling Shiromani Akali Dal in the State Assembly elections in India of 2007]].[9]