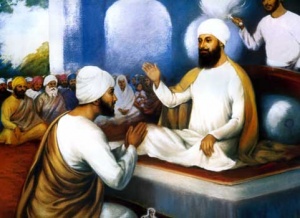 Sewapanthi or Sevapanthi or Addanshahi is a great traditional Sikh orders, a sect of philantrophist was started by Bhai Kanhaiya, after searching for a spiritual guide amongst Hindus and Muslims, he became a Sikh of the Ninth Sikh Guru. Guru Tegh Bahadur instructed Khanaiya to go out and serve humanity. Thus began the life time work of Bhai Khanaiya, ‘Seva’, self-abnegating service to all living things.

Sewapanthi is a conjunctive of two words; Sewa which can be translated as selfless service and panthi. Panth literally means a ‘widened road’ and in this context means ‘path of’. Therefore, this term can be defined as those who take the path of selfless service. 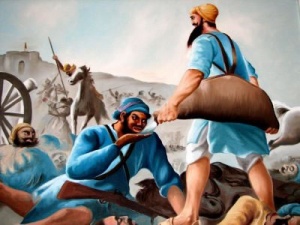 Guru Tegh Bahadur had a personal follower, one Kanhaya Lal a Dhamman (Dhiman) Khatri was born in 1648 in a town called Sohadara now in Pakistan. In time Originally an officer in the service of the Mughals, he became a drawer of water to.the Guru's horses and to all with him and a menial at his table day and night. The Guru taught him and invested him with the seli and topi. Bhai Kanhaiya established a Dharmsala (Rest house and temple) in the Northwest frontier in the Attock district of Punjab on a hilly track near the village of Kawa. The Dharmsala was situated on the Grand Trunk Road between Lahore and Peshawar. There, Khanaiya served all indiscriminately. He preached all Muslims and Hindus to be brothers in the eyes of the one Nirankar God the father of all. In time Guru Tegh Bahadur attained glorious martyrdom and his son Guru Gobind Singh came to occupy Guru Nanak’s spiritual seat.

On Guru Tegh Bahadur's death Kanhaya Lal was greatly saddened upon hearing of the martyrdom of his Guru. He in time resolved to see his great successor. The early years of Guru Gobind Singh were to be the preparation for the oncoming wars with the caste-bound Hindu Rajas and the bigoted imperial Mughal power of Aurangzeb. remained in Govind Singh's service and was with him at the siege of Anandpur. Guru Gobind Singh ordered all his able-bodied Sikhs to wear weapons and learn the arts of war. Bhai Khanaiya also obeyed the Guru's instructions and put on a sword but claimed his sword being a symbol of his Guru was for the use of his enemy. Thus, the Guru exempted Khanaiya and his followers from military duty and told him to carry on performing the duty allotted him by his reverend Guru Tegh Bahadur of serving all living beings.

In a latter battle in Anandpur Bhai Khanaiya served water indiscriminately to friend and foe alike. For this act, some angry Sikh warriors, the Nihangs accusing him of treason brought him before Guru Gobind Singh Ji. When Guru Ji asked him why he was helping the wounded enemy. Bhai Ji replied that he caould not distinguish between friend or foe he only see guru the one true Guru Va-eh Guru in all”. The Guru was very pleased, and not only did he order Khanaiya to continue, but also gave him a medicine chest as a gift. He then blessed him saying after him shall be a Sikh order who will serve all mankind indiscriminately. Noor Shah was amongst those Afghan soldiers to whom Bhai Khanaiya had served water and attended. He went onto become a great disciple of Bhai Khanaiya setting up a Dharmsala of his own.

From his personal service (sewa) or more probably from Sewa Ram, his first disciple, his followers are called Sewa-panthis: but in Amritsar they are known as AdanShahis, from Adan Shah, another disciple of Kanhaya Lal, and a rich banker who devoted his wealth and leisure to the propagation of their doctrines'. Their charity to travellers and persons in distress is proverbial.

Kanhaya Lal is said to have been commissioned by Guru Gobind Singh to preach Sikhism in the south-west and he founded his first dharamsala in the Thal or steppe of the Sind Sagar Doab. His followers are mainly Khatris and Aroras of that tract and the disciples are styled Nanak-Shahis, make ropes for a livelihood, refus-ing all alms and oblations. Some Sewapanthis are said to shave, others not. 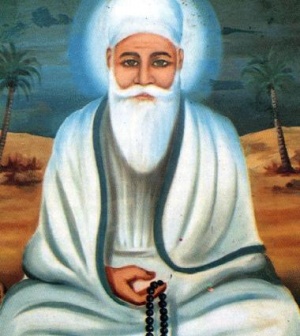 The Seva Panthis were pacifists & themselves desisted from all forms of violence. They are celibate and eat and share property together. Flesh, liquor and hemp are avoided. Their dress is white. Macauliffe describes them as an orthodox and honourable sect who live by honest labour.Bhai Addan Shah it is said he would not even travel on a path which would disturb the birds on the trees. One Seva Panthi leader Bhai Jagta had ponds dug specifically for the wild animals of the jungle so they could drink water. With the aid of the Sikh Maharaja Kharak Singh, Bhai Jagta also arranged a daily allowance of bread to feed the stray dogs and birds.

Based on such a definition the Sewapanthis were not strictly pacifist. Instead Sewapanthis display their own modified form of pacifism, in which they refuse to harm other forms of life in an aspiration to become the murat ki dyaa, the epitome of shaant ras, to remain in sattva guna. They dedicated themselves to the betterment of all forms of life. This was their blessed maryada from Guru ji. At the same time they agreed with and supported, in principle, the necessary violent actions required of the Khalsa for the protection of dharma.

This is beautifully illustrated by the infamous story of Bhai Adhan Shah sitting in the dera of a Muslim Pir friend at the time when a Sikh’s head had a price upon it. A high official called Saayad Subedar entered the dera and was surprised to see this Sikh before him. The subedar asked the Pir if this was a Sikh of Guru Gobind Singh (Muralay Ke Sikh). The Pir sensing the imminent danger replied, ‘No Sir! This man is a Sikh of ‘Baba Nanak Fakeer’. To which Bhai Adhan Shah stated loudly;

No I am a Sikh of Sri Guru Gobind Singh ji! (taken from Sant Rattan Mala sakhi 33)

As can be seen, Sewapanthis did not shy away from the actions of the Khalsa. Their maryada was given by Guru Gobind Singh ji to complement shastardhari maryada, and as is clear above, were fearless in stating such beliefs.

As touched upon earlier, another essential principle of the Sewapanthi samparday is the sincere regard for all life. This is beautifully elucidated by Bhai Kanhayya here in this bachan (oral teaching) taken from his later life. Essentially the principle expounded below underpins much of Sewapanthi practice.

The one who sees Ram in everyone when carrying out seva is great It is believed that in the world of people twenty-four Avatars (of Vishnu) existed. The Gurmukh holds them as the highest form of life force (praani) See (and treat) all in this physical world as an Avatar! (ਪਰਚੀ ਭਾਈ ਕਨਈਆ ਜੀ ਪਨਾਂ 46 – Parchi Bhai Kanhaiyya Ji Page 46)

This was text written between 1728 and 1740 by Bhai Sehaj Ram. Hence Sewapanthis historically have maintained an almost Jain-like reverence for life. Accounts of Sewapanthi mahapurush such as Bhai Adhan Shah describe incidents that place great value on the seva of the life around them regardless of the form, whether this be monkeys, birds, cows.

Sewapanthi centres are usually termed one of the following; Tikana, Ashram, Dera, or Dharamsala. Historically, Tikana was the preferred term for a Sewapanthi centre.The general set up is akin to most deras, although the specific practices may change from place to place. Aarti is sometimes performed with deepas, shankh and dhoop. Generally murtis are not installed in such centres, although samadhs of previous Mahants often are. Presently there are over 40 Sewapanthi centres, all in northern India.

There are strong historical links between these two sampardas. Bhai Adhan Shah, as has been mentioned, was initially an Udasi sadhu as a shish of Baba Gurdas Dakhani. Baba Gurdas taught him gurmukhi and sanskrit vidiya. This close bond has remained to this day, with the highly regarded Sach khand Vasi Mahant Ishvar Das Shastri Udasi having had an important role in the head organisation of Sevapanthis, Tikana Bhai Jagta ji at Goniana Mandi. Recently, Mahant Ishvar Das ji went into mahasamadhi.Mahant Shantanand ji has taken Mahant Ishvar Das’ position, and the photograph below depicts a recent meeting between the two sampardas at Goniana Mandi.Sant Gyani Balwant Singh ji talks of Sewapanthis becoming Udasin. Upon meeting with Udasi Babas and discussing with them, they may then change to their style of dress and begin studying with them. He gives the examples of two who have followed this path as Svami Amritanand and Sant Krishan Das Haridwar Vale. (see Nirmal Panth Bodh page 1065)