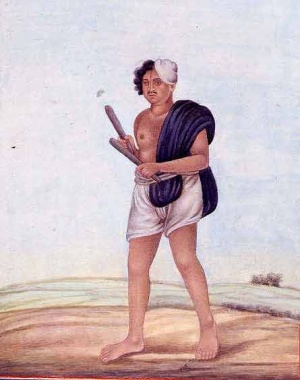 Suthra Shahis, the Suthra Panth or Sect of the Suthras was a mendicant order which owed its origin to Suthra Shah (1625-82), a disciple of Guru Hargobind. Not much is known about the life of Suthra Shah. The legend goes that he was born in a Nanda Khatri family of Bahrampur, now in Gurdaspur district, but born with a black mark on his forehead and with his teeth already cut. He was considered unlucky and was abandoned, left outside to die, by his superstitious parents.

An order of Sikh devotees whose origin is thus described:- When Teg Shah - a faqir was alive, a boy was born of dark complexion, (or with a black mark on his forehead) and moustache, and with his teeth already cut--and his parents exposed him, - a child so born is unlucky. The sixth Guru Hargobind, happened to find the child and told his disciples to take him up but they refused, saying that he was kuthra (dirty or ugly). The Guru replied that he was Suthra (clean, pure or spotless); they then obeyed him and the Guru took him under his care.

Among the Sikhs he came to be known as Suthra Shah, the suffix `Shah` in PUNJABI being the equivalent of the English word `squire or lord.` Suthra Shah was well known for his his humorous manner and his devotion to Guru Hargobind. He was appointed by Guru Har Rai, Guru Hargobind`s successor, to preach the Sikh faith.

As time passed, Suthra Shah`s followers, drawn from among both Hindus and Muslims, turned into a separate sect. They sang mystic songs in honour of Guru Nanak, but they had taken to mendicancy and forsworn all established social norms. They received novices into their order after a rigorous testing. They then were made to take a pledge to abide by the rules of the order.

The Kangra version adds this, Twelve years later, in the reign of Aurangzeb, the Hindus were being persecuted and the emperor removed every day one and a quarter maunds of sacred threads (janeoo-the string wich signifies a second birth for upper caste Hindus), erased their tilaks (marks which showed their dedication to Shiva, Vishnu or Marriage for a wife) from their foreheads, and compelled Hindu faqirs to show him miracles. The Guru then sent the boy Suthra to Delhi to exhibit miracles to the emperor and to convert him to the right path. On reaching Delhi the boy had a pair of shoes, l ¼ haths long, made at a cost of 1 ¼ lakhs of rupees. One night he put one of these shoes in the Delhi mosque, together with a lota (the vessel used for washing the hands and feet before prayer). Next morning the Muhammadans prostrated themselves before the lota and shoe, considering them to he sacred, and the shoe's and the lota's fame spread throughout the city.

One day the boy tied the other shoe to a stick and wandered through the city, crying that he had been robbed of his other shoe. News of this event reached Aurangzeb who sent for the boy and asked him whether the shoe found in the mosque was his. He said it was, whereupon the emperor said that, if it were found not to fit him, he would be beheaded. The boy agreed and, calling on his Guru's name, put on the shoe, which he found a little, too small. At this his face lit up, so that the emperor in amaze bade him ask any boon he chose.

The boy warned Aurangzeb against further persecution of the Hindus, and the emperor assented. Moreover he decreed that all his subjects should at every wedding pay one gold mohur and 1 ¼ rupees per shop to the boy, who refused to accept more than 1 ¼ rupee at each wedding and a pice from each shop. This decree was engraved on a copper-plate. Then the boy went to Lahore and built himself a house outside the Masti Gate. He made 4 chelas, Bawa Nihal Shah, B. Gulab Shah, B. Didar Shah and B. Changar Shah. In the plains the tax is still paid to the Suthra Shahis~, but in the hills it is not paid in full owing to the poverty of the people. The boy Suthra composed a 'baramasa' in which the above history is given.

Another version adds various details, prefixed to the above account. It makes the boy go to Delhi of his own accord, put on a boar's Intestines as a janeoo and apply a tilak of ashes to his forehead. The Qazi of Delhi orders this janeoo to be broken, but in vain, so he licks it away and in consequence an evil smell issues from his mouth. The Suthra is then arrested, but the emperor Aurangzeb keeps him near the royal person and early next morning sees his face. As a result his breakfast turns into loathsome insects and he orders the Suthra to his execution. The latter demands to see the emperor and protests his innocence whereupon Aurangzeb declares that the sight of his unfortunate face early that morning had deprived him of food all day.

To this the Suthra forcibly rejoins that the sight of Aurangzeb's unlucky face had led to his being condemned to death. So the emperor set him free and he took up his abode in a takia behind the Jama Masjid at Delhi. He had the shoes l¼ hathas long made and a lota made of earth set with precious stones. Going one night to the mosque to recite his prayers he fled in the morning from the mosque out of fear of the Muhammedans and left one shoe and the lota behind him. When he came before the emperor he found the shoe too small, but it just fitted Aurangzeb. At the Suthra's instance the emperor closes his eyes and finds himself alone with the Suthra in a terrible place. The Suthra mockingly asks him where are now his troops, and why he persecutes the Hindu faqirs. After craving his pardon Aurangzeb opens his eyes and finds himself back in the Delhi Fort.

Features of the sect

The candidate for admission into the panth is dissuaded, but if he persists in his resolve to become a Suthra, he is warned that he will have to subsist by begging, remain celibate and not quarrel, even if abused, His beard and moustache are then shaved off by a barber, but his top knot is left to be cut off by his guru', before whom the candidate lays a razor and asks that he will shave off his top knot. The guru' repeatedly refuses to do so, returning the razor to him several times, but finally the candidate's prayer is granted, his topknot cut off and a mantra whispered in his ear by the guru'. The initiate's clothes are given to the barber.

Karah is made and distributed among those present. The initiate is invested with a seli or necklet of black wool, and a cotton janeoo or sacred thread worn by a Brahman. The two dandas are also given him and his initiation is complete. Suthras must not wear anything but a dhoti and cannot wear coloured dopattas (shawls). Liquor and flesh are avoided but not tobacco. All castes are now admitted into the order, though formerly, it is alleged, only Brah-mans, Kashatriyas and Vaisyas were initiated.

The Brahminical rites are observed at death, and a Brahman is called in to perform the kiria karam, but it is said that a Sikh is also called in to read the Granth. The Sawarni and satarhwin rites of the Hindus are also performed, The body is cremated and the ashes taken to the Ganges, but a small quantity mixed with Ganges water and cow's urine (mudra) is also placed in the dera and a samadh built thereon.

According to the testimony of a contemporary historian, a candidate seeking admission into the sect was at first dissuaded from the course and warned of the hard and austere life ahead where he was to "subsist by begging, remain celibate and not to quarrel even if abused." The initiates were required to remain celibate and break off all family ties. They were to live on alms and to avoid liquor and flesh. Coloured clothes being forbidden for a Suthra, he wore white, with a sehJ`1 (necklet of black wool) round his neck and a kullah (high peaked cap) on his head, and such other garments as gave him a funny look. He applied a black mark on his forehead in imitation of the saffron frontal mark of the upperedge Hindu.

The invariably carried two small sticks (dandas) each about half a yard in length, which they clashed rhythmically together or struck against their iron bracelets while soliciting alms. These sticks served as a sort of license certifying the holder to be a Suthra sent by the mahant of a dera to beg alms for himself as well as for those who happened to lodge in the dharamsala attached to the dera.

This practice of playing of the dandas was introduced by Jhangar Shah who came to this order from the aristocratic family of a near relative of Lakhpat Rai, the minister of Nawab Zakariya Khan, governor of Lahore (1726-45) and infamous torurer of the Sikhs under the Mughals. The Suthrashahis venerated the Guru Granth Sahib and recited hymns from it they had remembered by heart. But when they visited Hindu homes for alms, they sang praise of Durga, the goddess. They shared popular Hindu beliefs and observed Hindu customs and rites such as burning their dead and consigning the remains to the River Ganga.

Suthrashahis owed allegiance to their living guru and had their mahants or priests to manage their deras and dharamsalas in different places. They roamed around extensively and established their centres in distant parts.

Besides several in the Punjab in towns such as Sanavari, Behrampur, BATALA (all in Gurdaspur district), Nur Mahal (Jalandhar), AMRITSAR and Lahore, their deras were known to exist in Jaunpur, in South India and in Qandahar, in Afghanistan. A dharamsala built by Jhangar Shah outside the walled city of Lahore, between the Masti Darwaza and the Raushnai Darwaza, enjoyed the patronage of Maharaja RANJIT SINGH and was endowed by him. Some of the Suthrashahi saints wrote religious verse, Vedandc in tone.

Suthra Shah himself is credited with having written a baramasa, a calendar poem after the twelve (bara) months (masa). The sect flourished considerably during the reign of Maharaja Ranjit Singh, but gradually its members became lax and lost their original religious fervour. They took to gambling and drinking and paid scant regard to moral and ethical values or the opinion of Sikhs and Hindus. On the other hand, they evolved their own norms of behaviour attractive more for idlers and escapists. This deterioration in their moral standards resulted in the decline of the sect and ultimately in its virtual extinction.