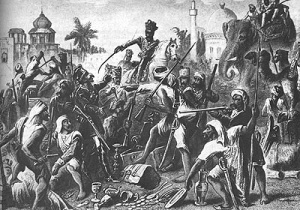 Please note - Sant Baba Ram Singh Namdhari is considered by most Sikhs as a great saint, reformer and revolutionary. His followers, however started calling him "Satguru" which he never claimed himself and for most Sikhs this title is only reserved for the Guru Granth Sahib.

Bhai Ram Singh was born in 1826 at village Bhaini in the District of Ludhiana. His father, Jassa Singh, worked as a carpenter in his village. When Bhai Ram Singh grew up, he joined the Khalsa Army and served for several years in the Risala (Cavalry) of Kanwar Nau Nihal Singh, grandson of Maharaja Ranjit Singh. During his service in the Khalsa he fell under the influence of a self-styled Guru Balak Singh and decided to leave the army. His Group saw many of the pratices of the Maharaja, his Darbar (Court) and his Kingdom as excessive and sinful.

In 1857, the year of the Purbia Revolt when both individual Hindu and Muslim units revolted against the British hoping to re-establish their previous rulers and small kingdoms, Bhai Ram Singh had a small revolt of his own in mind, indirectly aimed at the British his efforts were meant to return the Sikhs to, what he and his master Balak Singh saw as, a more purer form of Sikhism.

They founded what was called the Sant Khalsa, which became the nucleus of his Namdhari or Kuka movement. They sought to end any education of Sikhs in the English language; the use of homespun clothing (as opposed to using imported English cloth or cloth made in English owned factories) and the eating of only vegetarian food cooked by members of their sect.

Casteism was strictly forbidden. Growing more radical in their beliefs they attacked abbatoirs (slaughter houses) turning themselves into killers of those who killed animals for human consumption — butchers. Over time they grew more and more radical until their leader Bhai Ram Singh was exiled to Burma.

In 1863, Bhai Ram Singh issued a comprehensive code of discipline for his followers. The code went a long way in consolidating the ranks of the Namdhari also called the Kuka movement.

He is said to have baptized more than 1,000,000 Sikhs into the Khalsa fold. This was at a time when the British missionaries were trying their best to break the Sikhs from their roots.