From SikhiWiki
(Redirected from Radha Swami)
Jump to navigationJump to search 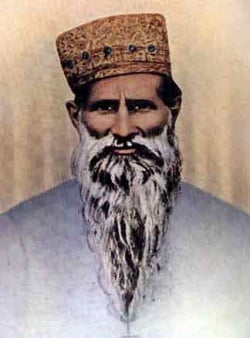 Radha Soami "Radhasoami" (also Radhasoami Satsang and Radha Swami) is a sect & spiritual movement, founded in 1861 by Shiv Dayal Singh Seth. It boasts a following of over two million people worldwide. He related the human soul to Radha whose goal was to merge with eternal reality (Soami), thus the name Radha Soami. As do the Hindus he preached vegetarianism and abstinance from intoxication.

Shiv Dyal Singh was never big on spreading his teaching or increasing his flock of devotees. He established his Satsang in Agra. In 1855 Dayal Singh had only a handful of followers. At the time of his death in 1878, it is thought that his following had grown to several thousand.

The sect is faithful in using the Guru Granth Sahib the Holy Book of the Sikh's. They have never tried to alter the proceedings or tenants of mainstream Sikhs and do not portray their leaders as sucessors to the 10 Gurus of the Sikhs. Today the Beas ashram maitnains a Langar (free kitchen) and has lodgings for Sadhus, Sewadars, Satsangis and others.

The MSS Charitable hospital provides free medical care for the group's members and the needy and includes a serai (inn) for the free accommodation of relatives of patients. An annual eye clinic gives medical aid to people suffering eye-ailments, including the removal of cataracts.

Practices of the Sikh religion not followed by the Radhaswamis:

These are some of the differences between the practises of the Sikhs and the Radhaswamis. so how could they call themselves Sikhs. Do they think that dressing like Sikhs and using the Guru Granth Sahib is enough to be refering to themselves as Sikhs?

“Rahat piaari mohe Sikh piaara naahe!’
The devotees who recite the name of Akal Purakh, Live in disipline and follow the Sikh Rahat Maryada; Namm simran, Reading Gurbaani only, and strictly follow the restriction issued at the time of Baptization (Amrit chakna) in Sikhi (Khalsa).

He is clear to his devotees that, "Jab eh gahe bipran ki reet Main na karon inki parteet !! " Means when the devotees shall go the other way, he will not be with them otherewise Guru is always with his Sikh.

But yet many so-called 'Sikhs' can be seen begging for the 'Gupt-Mantar' at the door of Human 'Gurus'.