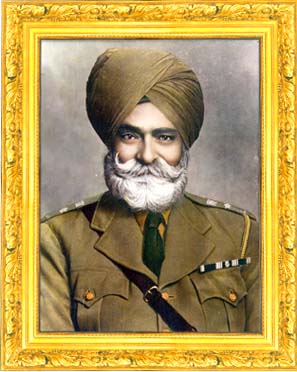 The person conquers the unconquerable with the humility of a dog for his Master, with the exclusive love and faith of a dog for his Beloved Lord. Even the dog named ‘Kalu’ was an object of respect and adoration for father. Kalu was named Kalu because of its black colour and was always found sitting at the threshold of the Kutia (Thaath) of Babaji. Whenever Babaji came out, Kalu always used to lay itself at His lotus feet and express his love and faith by licking His shoes and by wagging its tail. Babaji used to compassionately respond and acknowledge Kalu's love by keeping His long stick on his forehead. Father’s thoughts, words and speech, service to the sangat, homage at historical gurdwaras, all activities of day-to-day life were invariably saturated with this unparalleled humility and fervour of a dog for its Beloved Master and His Sangat.

Once it so happened that father, Bhai Sahib Bhai (Sant) Sujjan Singh Ji (famous Kirtanias) and other devotees were going together to pay their homage at Babaji’s Thaath. Father as usual found Kalu sitting at the entrance to the Thaath. Father reverentially lifted Kalu and placed its feet on his forehead thereby imprinting on it the dust of the feet of Kalu. Sant Sujjan Singh Ji jokingly mocked at this and passed a sarcastic remark. Father in his characteristic humility replied,

“Bhai Sahib, I earnestly pray to my Lord Babaji to accept me as His dog. How fortunate Kalu is that it is already enjoying that privilege and status.”

The following evening, Sant Sujjan Singh Ji came to father with tears of repentence in his eyes. He narrated a strange experience. He envisioned the previous night that a dead person was being taken by the messengers of Yam Raj to hell. Suddenly something, from the sky above, fell on the body of the cursed person. The messengers of Yam Raj ran in panic, and instead Devtas appeared there with a palanquin, to take the same person with honour to heaven. On equiry the Sant Ji was told that “an eagle had snatched a piece of bread from the feet of Kalu, the dog of Baba Nand Singh Ji Maharaj, and while flying dropped the piece of bread on the condemned person being carried to hell. As that piece of bread was smeared with the dust of the feet of Kalu, the condemned soul was instantly liberated and Devtas came to pay homage to him and to escort him to heaven.”

With tears in his eyes, Sant Sujjan Singh Ji further said that he had been searching for Kalu since morning but to no avail, and sincerely apologised for his remarks of the previous day. Father again humbly remarked : - “Bhai Sahib, Mukti Taan Baba Nand Singh Ji Maharaj De, Kuttey Bhi Baksh Sakde Han”

Mahan Babaji was camping in the jungles of Dehradun. Having taken his early morning bath at a running stream, father felt a yearning desire within his heart, to be blessed with the holy darshans of Mahan Babaji before he saw anyone else. But then father himself appreciated and realised that this was not a feasible prayer, as he had to pass all the way, from the stream through places, where other devotees were camping. Father set out on his return journey after the bath. He had covered only a little distance, when he noticed to his complete surprise in darkness, his Lord of Love approaching him alone, unaccompnied by anybody else. Father in deep gratitude and reverence fell at Mahan Babaji’s Holy feet and started profusely weeping. The moment father had prayed in his heart, Mahan Babaji, the Knower of all hearts, had got up from His meditation and set out to fulfil father’s yearning aspiration. As father got up, Babaji blessed him with a glance of deep compassion and grace, and said, “You wanted it this way”. Father at that time gave expression of a deep-rooted desire to the Lord, to leave everything worldly and devote all his time and rest of his life in Babaji’s service. Babaji asked father what he would do? Father in all humility submitted that he shall cause no inconvenience to Mahan Babaji, that he shall make his own arrangements for his food etc. and that he sought only the commode service as Babaji’s sweeper. Such was the intensity of father’s yearning appeal and prayer that most compassionate Babaji went into serious divine contemplation. After a pause, He again cast a most wonderful and penetrating look of Grace on father and filling him with waves of ecstasy and Bliss compassionately remarked, “Dipty, Time is not yet ripe.” Thereafter, father for the rest of his life, mentally performed the commode service of his Lord daily as coveted Sadhana and used to proudly proclaim himself as ‘Babaji Da Churha’(sweeper).

He bathed his body with the dust of the feet of the holy sangat of Babaji. He rolled and rolled in the holy dust in such a way as if he was swimming in a deep Ocean of Bliss. Such was the state of his rapture while so bathing in this holy dust. Physically, mentally and spiritually, he had transformed himself as the dust of the sacred feet of Mahan Babaji. He rejoiced and delighted in this holy dust more than any other thing. His own individuality and ego had totally submerged, vanished and disappeared in this holy dust. The flavour of humility thus attained from the holy dust shone on his face with unique joy and splendour.

Father used to thus sanctify his body and mind with the dust of the holy feet of the blessed sangat of Baba Ji. That is the way to get one’s ego crushed under the holy feet of one’s beloved Satguru. Ego melts away in the humble service of the satguru, in the holy dust of his lotus feet. It melts away in the nectar of his Amrit Nam. It gets washed away, swept away in the tears of divine love. Ego gets lost in the madness of love and intensity with which a lover chants and sings the glorious Nam and praises of the Lord. Humility is the master key for entering into the kingdom of the Lord.

He used to besmear his forehead with the dust of the feet of that dog Kalu and used to cry from the depths of his heart “Oh my beloved Satguru Lord, accept me as your humble dog”. He used to besmear his whole body with the holy dust of Baba Ji’s sangat at the Thaath and would joyfully roll in that holy dust reciting hymns in honour and praises of his beloved Master.

He was a total disciple of Mahan Babaji in thought, word and deed. He had taken permanent refuge in His holy feet and Baba Ji had most graciously planted His sacred feet in the temple of His devotee’s heart, the sanctity of which father enshrined and preserved with utmost devotion, humility and care. He adored and worshipped Sri Guru Granth Sahib with a burning faith.

His way of adoration of the holy feet of his beloved Master was incomparable. He would profusely bathe them with streaming tears of his overwhelming divine love and continue licking these holy feet as a pet dog does his Master's. I have not come across even one similar example in spiritual history where a devotee has worshipped the holy feet of his beloved Lord with such deep humility and in such maddening ecstasy. No wonder he felt so highly proud in calling himself a dog of his beloved Master and a dog of the dogs of his Master in the presence of everyone while addressing congregations of lakhs of devotees. Divine grace floods the humblest of the humble and the lowest of the low, that is what humility means in this great religion of Sri Guru Nanak Sahib. The most wonderful aspect of his unique personality was as to how he had touched the bottom of the bottomless ocean of humility and he was thus blessed with supreme Grace.