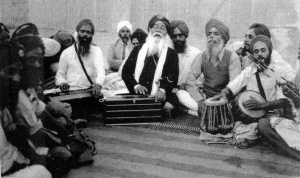 They believe in the efficacy of kirtan (devotional singing) and regularly hold overnight sessions (rain sabai). This group also attaches particular importance to the meditation and repetition of the Sikh mantra 'Vahiguru' ('wonderful guru'). The group observes strict vegetarianism and will only cook with, and eat out of, iron utensils. All references to caste distinctions are strictly forbidden. They reject the list of musical modes at the end of the Adi Granth (rag-mala), because of its inaccuracies and do not repeat it when there is a complete reading of the scritpure. However, believing that the words of the Guru Granth are literally the words of the Guru, they can be called fundamentalist. Furthermore there is no interpretive explanation (katha) given of scriptural passages, since the meaning is assumed to be clear and transparent. The group replaces the original uncut hair (kesh) with a small under-turban (keshki), which both women and men wear. In such beliefs the group reject the general code of conduct known as the Sikh Rahit Marayada of the S.G.P.C. (See introduction and Singh Sabha and Sikh Panth entries), and produced their own called rahit-bibek (bibek means discrimination, discernment, insight). They also believe in a different Khalsa initiation ceremony, wherein the five beloved ones, or five Gursikhs place their right hand on the neophyte's head and meditatively repeat the mantra "Vahiguru", revolving around the innitiate for five or so minutes. 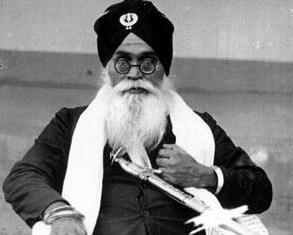 Randhir Singh (1878-1961), a Jat from Ludhiana, initiated the movement from his long periods in prison - since he vehemently opposed British rule. He caused considerable consternation with his vehement demands that he abide by his Khalsa's rahit (code of conduct) whilst in prison. His rigorous interpretation did not allow him to eat out of anything not made in an all-iron vessel (Sarob Loh, echoing Guru Gobind Singh's term for God). He was associated with Teja Singh of Bhasaur and his Panch Khalsa Divan (see introduction). However, he cut all ties with him when Teja Singh was excommunicated. His followers are known as the Bhai Randhir Singh da Jatha, which is used interchangeably with the Akhand Kirtani Jatha. The latter is headed by Amarjit Kaur, whose husband was killed fighting the Sant Nirankaris in Amritsar in 1978. The Sant Nirnakaris were an off-shoot of the Nirankaris, see entry. There was an extremist off-shoot of the Akhand Kirtani Jatha in the form of the Babbar Khalsa who claimed responsibility for killing many Sant Nirankaris in the 1980s. The Bhai Randhir Singh da Jatha and/or the Akhand Kirtani Jatha movement had organised kirtan in the years after for the Harimandir Sahib (Golden Temple). Amarjit sided with Harchand Singh Longowal, president of the Akali Dal in the troubled times of 1984, and deeply opposed the extremist Jarnail Singh Bhindranvale. (See introductory essay).

The women are expected to wear the turban (Keski) aswell as the usual kesh (uncut hair). The importance of the keski is justified by the fact that all the other five K's are external and additional to the natural human form, except for the uncut hair (kesh). Therefore it requires special external treatment. (See Khalsa Singh entry).

There is little research available for this movement. There are no official numbers, (see at the end of the Explanatory Introduction).

Amritsar, Panjab, and they have a base in Coventry, UK. The Bhai Randhir Singh da Jatha is based in Ludhiana, Panjab.