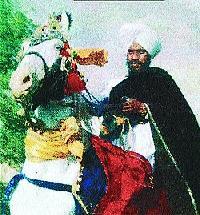 Controversial pic of Piara Bhaniara, in regalia which evokes the dress of Guru Gobind Singh for many.

Baba Piara Singh Bhaniara (born in 1958) is the spiritual leader of a breakaway Sikh sect based in Dhamiana village in Ropar, Punjab. He is believed to have about 20,000 to 600,000 followers, the majority of whom are dalits.

He once worked as an employee of the Horticulture Department at a sericulture farm in Asmanpur village. His grew up in a modest family, his father Tulsi Ram, a mason, was a caretaker of two mazaars. After his father’s death, Bhaniara took over the mazaars and proclaimed himself a ‘baba’ (a spiritually advanced person).

Piara Singh Bhaniaraa was known as a healer and recognized for his social work. He used to leave food for wild animals in the forests. Senior Congress leader Buta Singh had visited the Baba several times between 1985 and 1995 seeking and improvement in the health of his wife Manjit Kaur, who was suffering from several problems; heart, kidney, skin and lungs. Buta Singh was later to disassociated himself from the Baba.

Baba Bhaniara has written a book titled the "Bhavsagar Granth". This has offended the orthodox Sikhs, who complain that the baba is equating himself with the Sikh Gurus. An organization Khalsa Action Committee was formed headed by Mr. Charanjit Singh Channi, which disrupted a religious congregation at the home of one of Baba's followers in Ludhiana in 2001 at which a copy of the Baba's book was snatched and damaged.

Following this, the Baba's followers were accused of burning copies of the Guru Granth Sahib, the Granth invested as Guru by Guru Gobind Singh shortly before his death. No evidence to support this accusation has, however been found.

The Self proclaimed Baba was arrested in Oct. 2001. His book was banned by the government when several copies of the controversial Granth were burned. An agitation was called for by several Sikh youth organizations including the Dal Khalsa, after which a building and a center of the Baba were demolished. Attempts were made to convert the center into an orthodox Gurdwara.

An article in Economic and Political Weekly May 26, 2007 stated:

"Soon enough the baba was arrested under the National Security Act and a number of criminal cases were slapped against him. Many of his followers were put in jail. In the prison they were attacked with acid and knives by other inmates claiming adherence to Sikhism. The Bhavsagar granth was banned by the government. The copies under circulation were confiscated. Any one found in possession of a copy was arrested. The print ready copy was taken away by the police and perhaps destroyed. Baba Bhaniara’s various deras across the state were destroyed. At least in a few places the deras were forcibly converted into Sikh gurdwaras and brought under the administration of the SGPC. No action was taken against those who had perpetrated these attacks"

When he was in Ambala, for a court appearance in connection with his alleged involvement with the charge of the reported burning of the copies of Guru Granth Sahib. At about 11 am, September 24th, 2003, a Sikh youth named Gopal Singh, pretending to be one of his followers, walked up to the vehicle in which the Baba was seated, offered his blessings and even made an offering of Rs 20. Suddenly the youth, whipped out a long bladed knife and slashed at the would be Baba, stabbing him in his neck and back, before the Punjab police personnel had time to react. Baba Bhaniarawala was, to say the least, taken aback by the attack of a seeming admirer, but he managed to survive the wounds. The whole incident was like a page out of the assasination of Mohandas K. Gandhi by Nathuram Godse, who had also gained close contact with his target by pretending friendship.

A member of Babbar Khalsa, Gurdeep Singh Rana is under arrest for trying to assassinate the Baba using a bomb in January 2005.

The conflict was reported as a struggle by some between Dalits and Jats. Dalit is a modern term for those who were consisdered to be of the lowest castes-- the carmanna (leather workers) , vapta (barbers), dhobiwallas (washermen and women), bhanghis or churas (sweepers/collecters of night soil), Dums or dombas (drummers or street performers---Mardana, Guru Nanak's minstral companion was of this Muslim caste) -- a system that the Sikh Gurus diligently sought to put an end to. Guru Gobind Singh even assigned a new name to the former caste on the eturn of his father's severed head at Anandpur. Many Sikhs formerly of this caste turned to other religions or Babas, as some Sikhs still refused to associate with them.